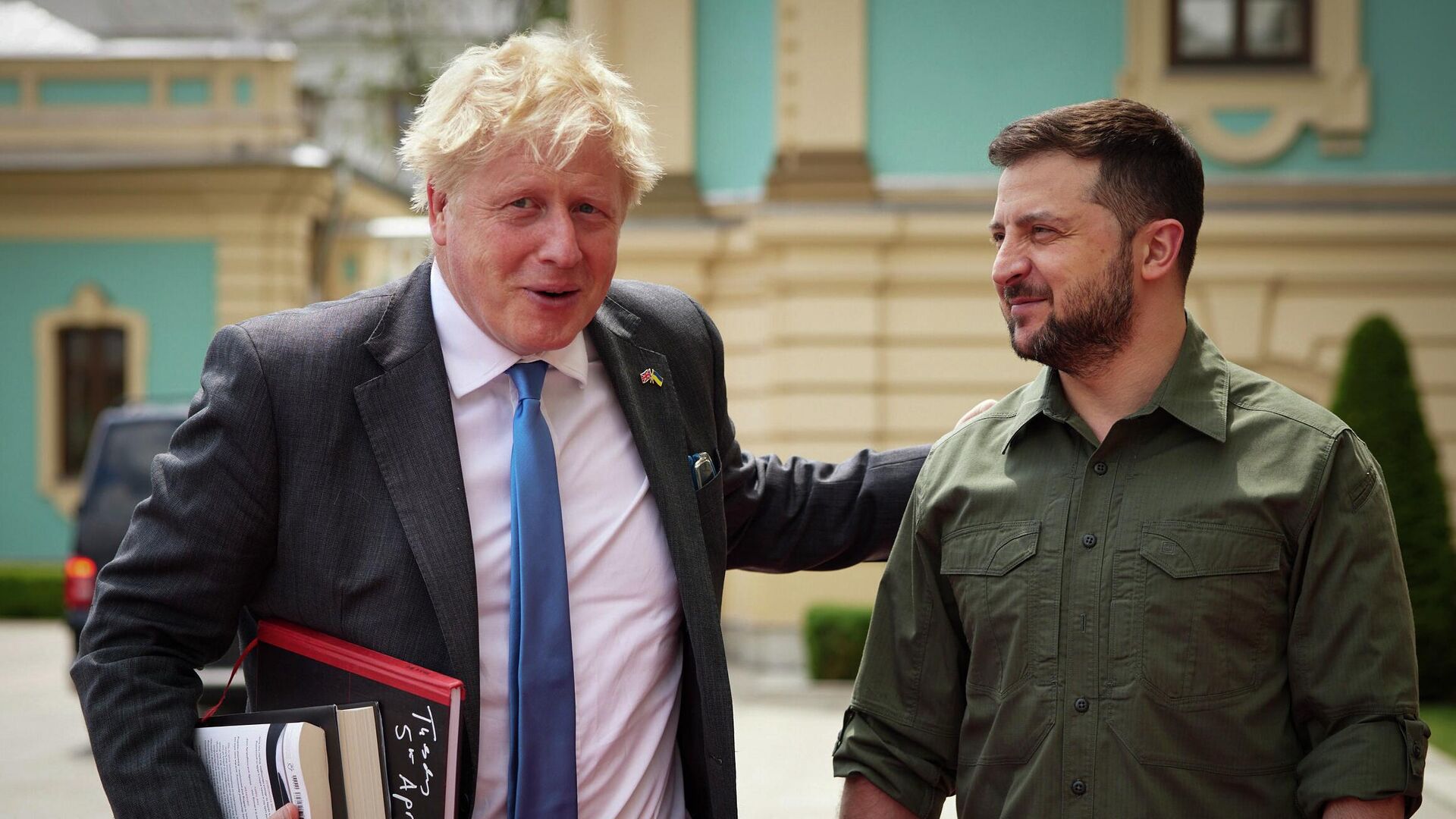 After his second surprise visit to Kiev, UK Prime Minister Boris Johnson urged western leaders to “steel” themselves for a long conflict in Ukraine. The premier has come up with a four-point plan, which he claimed would “recruit time to Ukraine’s cause”.”Looking at the pointless and cruel folly of the UK political elite’s policy towards Russia and Ukraine, it is becoming ever more difficult to work out what they are trying to achieve,” says Nick Griffin, political analyst and former MEP. “Presumably, it’s all supposed to lead to Russia being dragged into a new Afghan-style ‘Long War’, resulting in regime change in Moscow. But given the military, economic and financial developments as the conflict drags on, it is clear that such an aim is completely unrealistic.”Boris Johnson’s call for a long-standing resistance came as the mainstream press in the West changed its tone regarding Russia’s special military operation, acknowledging that Kiev has sustained huge losses and advocating a ceasefire and peace settlement.In contrast, the British premier has doubled down on the necessity to provide further military support to the Kiev government. First, Johnson offered Ukraine a training campaign for its military personnel. According to his office, 10,000 Ukrainian soldiers could be trained every four months. Second, the British prime minister called upon western leaders to provide “constant funding and technical help” to Ukraine in order to preserve “the viability of the Ukrainian state”. Third, he proposed developing “alternative overland routes” to Ukraine. And finally, he emphasised the need for additional resources dedicated to getting food such as “corn and wheat piled up in silos across Ukraine” out of the country.

Is the UK Really Capable of Delivering on Johnson’s Promises?

The premier’s aid plan raises two major questions: whether the UK has enough resources to accomplish the task; and whether London could lead European countries in a bid to support Kiev’s resistance.”Even if [European] governments do hand out extra cash [to Kiev], the main impact will just be an extra twist to the inflationary spiral already being caused by the post-2008 credit spree and the destructive over-reaction to COVID,” says Griffin.The UK and EU member states’ economies are suffering from rocketing inflation and soaring energy prices. The Bank of England is anticipating that inflation could hit 11 percent in the country in the autumn. Inflation rates in other European countries vary: France is dealing with 5.8 percent inflation, but it is as high as 20 percent in the Baltic states, according to OECD data.

"I would take the promises being offered by the West with a pinch of salt," says John Devine, international affairs analyst with the think-tank, the International Team for the Study of Security in Verona. "Although I do not doubt their sincerity I cannot see how they will be able to offer the long-term funding needed to build Ukraine back up."

He notes that there have been calls for a Ukrainian “Marshall Plan”, “but the amount of money required would be astronomical and would far exceed the amount spent by the US to build up western Europe in the aftermath of the Second World War.””And the cost-of-living crisis is a major issue right now and will ultimately become the priority for western nations to deal with rather than international affairs,” the analyst stresses.When asked whether Britain has the ability to lead the West, both Griffin and Devine responded: “No”.”As for the UK leading the West, Britain has been nothing more than a yappy but increasingly toothless little old dog for the Washington Deep State for decades now,” remarks Griffin.Furthermore, Britain’s economic failings are shocking, which does not make it a good candidate for western leadership, notes Devine, adding there is no long-term strategic vision being offered by the UK.”You only need to look at its conduct regarding Afghanistan to know that Britain has no ability at present to lead the West in the long run,” the analyst emphasises.© AFP 2022 / LEON NEAL(FILES) In this file photo taken on June 5, 2022 shows Britain’s Prime Minister Boris Johnson reacts during the Platinum Pageant in London on June 5, 2022 as part of Queen Elizabeth II’s platinum jubilee celebrations 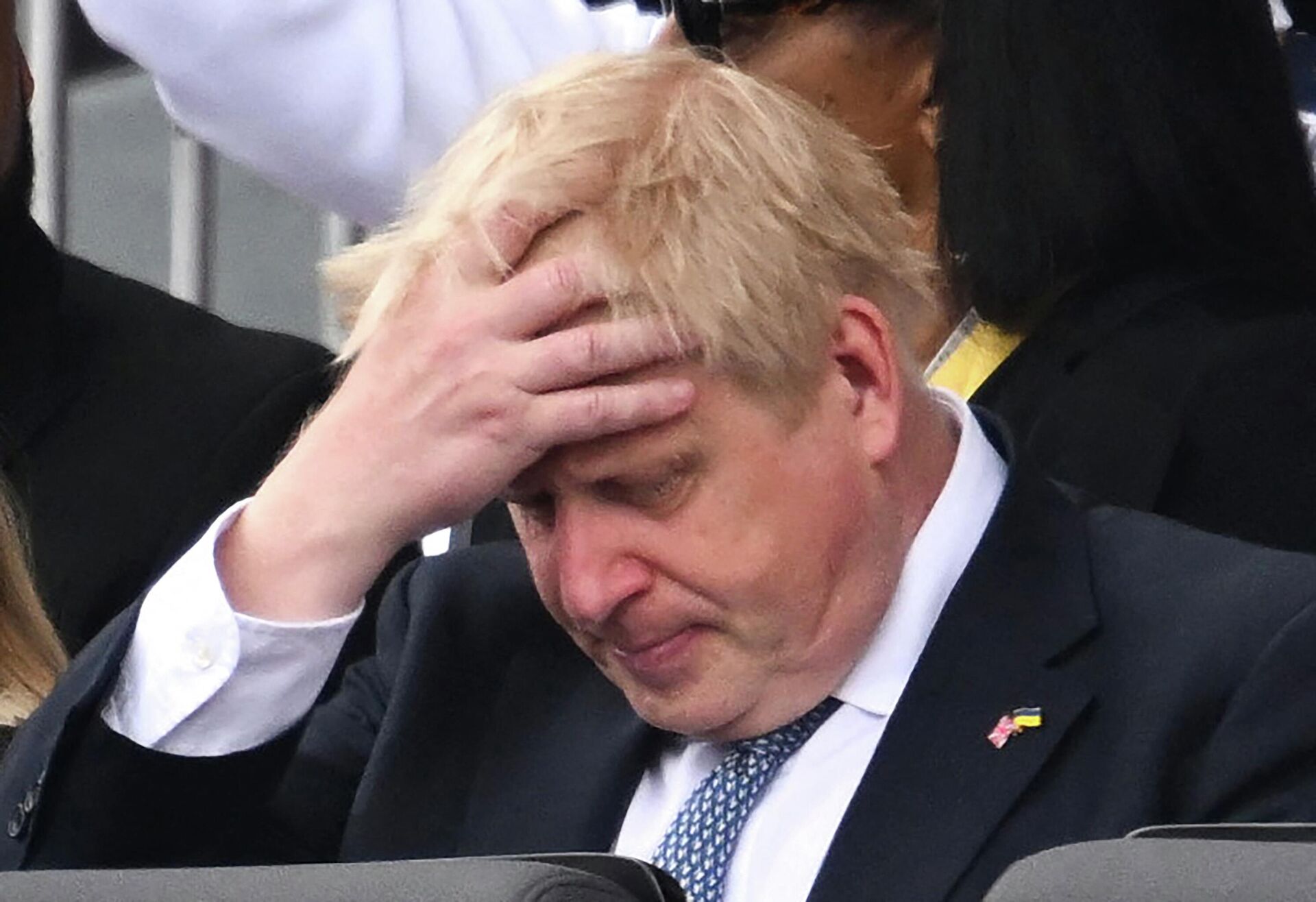 Johnson Diverts Public From His Failures

Yet another reason the British premier is pushing ahead with his “Ukraine aid” plan is because his cabinet is mired in scandal, the analysts suggests.

"I would say [the aid plan] does benefit the UK government, in particular Prime Minister Johnson, to distract from domestic failings," says Devine. "The conflict offers an opportunity for Johnson to be able to appear statesman-like while he interacts with other world leaders and distract away from his domestic failures in the UK."

Johnson, indeed, has a lot on his plate: he recently survived a no-confidence vote brought by his own MPs over “partygate”. He is facing a Tory rebellion over his Northern Ireland Protocol amendment and the Rwanda migrant scheme. The premier also has to deal with the re-emergence of calls for a Scottish independence referendum. Above all this, the UK is teetering on the edge of recession with living costs crisis already becoming unbearable in the country.Still, Johnson’s grand-standing in his support of Kiev is not in the true interests of Britain or the British people, argues Griffin.

"The actual proxy war does nothing for us other than gobble up taxes, while the disruption to world food and fertiliser supplies is creating the risk of growing instability in more and more countries," the former MEP says. "That will feed into increased problems with refugees and illegal migration. The sheer hypocrisy of the NATO position is also very damaging to the reputation of those countries most responsible for it – ie, Britain and the US."

The blow-back from the sanctions slapped on Russia in the wake of the beginning of the special operation in Ukraine, has already been felt in how energy prices are rising, Griffin notes.”But there is much worse to come,” he warns. “Are western governments, peoples and millions of ‘guests’ ready for any of this? Absolutely not – Russians should stock up on popcorn and be ready to enjoy the show!”

Ex-CIA Analyst: US Military Aid Not a Game Changer for Kiev, Ukraine Has Already Lost

Durham Probe Is On-Going, Should Get to the Bottom of Russiagate, Analysts Argue

Is the US Economy Doomed to Plunge Into Recession?

Fighting to Win: Donbass is the Place Where the Old World Order is Challenged, French Volunteer Says