Empty vessels are tied up in a line to secure positions of a queue for buying kerosine oil outside a fuel station in Colombo, Sri Lanka, Sunday, June 5, 2022. 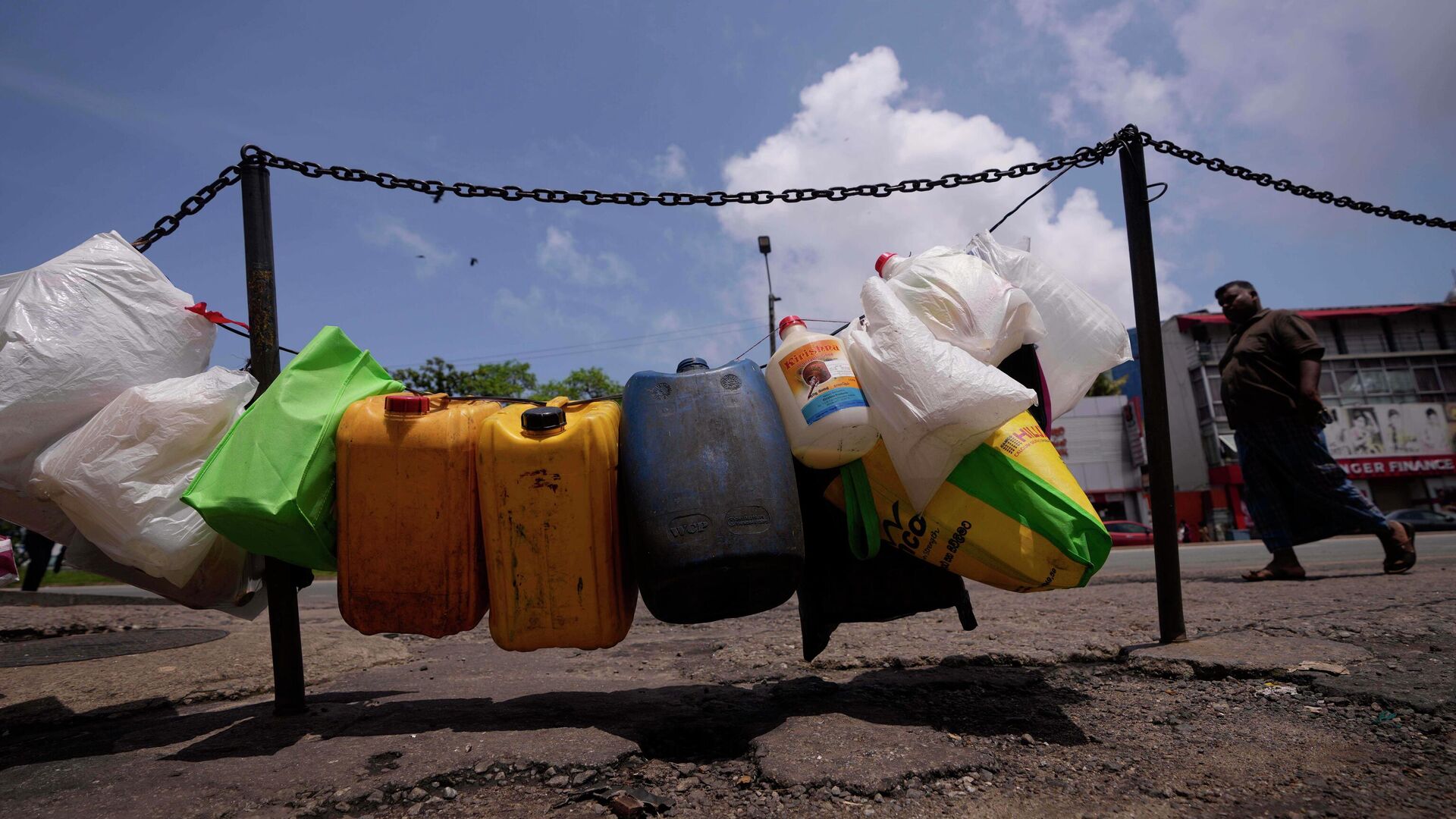 Sri Lankan PM Ranil Wickremesinghe said this month that Colombo will have to return to Russian oil imports if it fails to procure oil from other sources. Colombo reportedly bought a 90,000-metric ton shipment of Russian crude last month to restart its only refinery, but has been wary of buying more, owing to its fear of offending the West.Western states, including the US, are creating “impediments” for Sri Lanka as it tries to source discounted Russian crude in order to ease its ongoing fuel crisis, a former Indian Army colonel who has previously served as a military intelligence (MI) specialist in Sri Lanka has told Sputnik.“Sri Lanka would not like to offend Western powers by opting for Russian trade as they are capable of arm twisting international monetary bodies who can bail out Sri Lanka from its economic logjam,” says Colonel R. Hariharan, an expert at the Indian security think tank Chennai Centre for Chinese Studies (C3S). He was also part of the Indian Peacekeeping Force (IPKF) to Sri Lanka in the 1980s.The observations by Hariharan came as Prime Minister Ranil Wickremesinghe began deliberations on a bailout package with the International Monetary Fund (IMF) in Colombo on Monday.The Sri Lankan government warned its citizens last week that the ongoing fuel supplies would only last till 21 June. Meanwhile, Colombo awaits, as of Monday evening, an official confirmation on another credit line of $500 million from New Delhi meant to import fuel.

Sri Lanka Announces Default on External Debt12 April, 06:40 GMTSri Lanka is facing its worst economic crisis since 1948, caused by depleting foreign exchange reserves. The government has been unable to pay for its fuel, food and other essential imports, triggering crippling shortages, runaway inflation and even violence among riled-up citizens.Hariharan further underlines that anti-Russia sanctions in the wake of the special military operation in Ukraine have further “complicated” matters for Sri Lanka.

“[The sanctions] on Russia has skewed the global economy, which was taking baby steps to recover from Covid pandemic. Prices of oil and commodities like rice, wheat, corn and edible oil prices have skyrocketed,” the ex-Indian military officer notes.

With regards to importing Russian crude, Hariharan feels that Sri Lanka “might change its mind” if and when New Delhi introduces a “clear cut methodology” for trade with Moscow.“In such a case, Sri Lanka would probably be able to use it to improve its trade with Russia,” he says.In spite of growing pressure from Washington and the EU on New Delhi to tone down its strategic and business ties with Moscow, the Indian government has doubled down on its decades-long strategic partnership with Russia amid the Ukraine conflict.As per media reports, Moscow has overtaken Saudi Arabia to become New Delhi’s second-biggest oil supplier in May, providing for about 16 percent of the overall imports. India imported just around 1 percent of its overall crude from Russia in January-March’22 quarter.Hariharan believes that a “robust” India-Russia ties in energy sector could be a precursor for Sri Lanka to shed its inhibitions on ramping up ties with Moscow.“Geography has conferred a huge strategic advantage to India, as Sri Lanka is located within 40 km from India’s southern tip,” says Hariharan, as he explains the close ties between New Delhi and Colombo.He notes that New Delhi has emerged as one of the biggest donors to Sri Lanka since the eruption of the economic crisis this year, having allotted around $3 billion in bilateral assistance, aside from credit lines for meeting the fuel shortages among others.

“Neighborhood First (New Delhi’s preference for interests of the neighboring nations in its foreign dealings) is an important component of Prime Minister Narendra Modi's foreign policy strategy and Sri Lanka as a close friend and neighbor has always depended upon India's help in times of distress,” recalls the Indian expert.

China’s Presence in Sri Lanka ‘Can’t be Wished Away’

Hariharan reckons in spite of misgivings in New Delhi and in some Western capitals about Beijing’s growing influence in Colombo, China is “firmly established” there and its presence cant be “wished away”.Besides being a large external creditor of Sri Lanka, state-backed China Merchant Port Holdings, a Hong Kong-headquartered company, was awarded a 99-year lease in the Hambantota port in 2017. Beijing is also developing several state-of-the-art infrastructure projects in Sri Lanka under the One Belt One Road (OBOR) initiative.

India to Build ‘Hybrid’ Power Plants Off Sri Lanka’s Northern Coast After Chinese Firm’s Expulsion29 March, 14:26 GMTWhile Hariharan notes that Beijing has emerged as a “strategic rival” of New Delhi in south Asia in recent years, Hariharan also believes that India and China could collaborate in Sri Lanka to help it overcome the economic crisis.“That would be in line with the BRICS’ vision of creating an equitable world order,” he says, referring to the five-nation grouping comprising Brazil, Russia, India, China and South Africa.The Chinese foreign ministry this month praised New Delhi’s assistance to Sri Lanka. Foreign ministry spokesperson Zhao Lijian said that Beijing “is willing to work with India and other members of the international community to help Sri Lanka”.

“Geostrategically, Sri Lanka dominates the sea lanes of the Indian Ocean, making it a strategic pivot of the region. China is aware of this,” the former Indian colonel says.

He further notes Beijing became an “indispensable” military partner for Sri Lanka in the final stages of the war against the Liberation Tigers of Tamil Eelam (LTTE), a more than two-decade long insurgency which ended in 2009.Hariharan says that Beijing would eventually agree to restructure Sri Lanka’s debt, in spite of being non-committal to do so, so far.

“We can expect China to relax the repayment terms in the coming days after dragging its feet as a special favor to Sri Lanka. I think it has more to do with China's style of economic diplomacy than IMF intervention in Sri Lanka,” he says.

One of the sticking points between the IMF and the Sri Lankan government is the restructuring of external debt that Colombo owes to Beijing.The IMF has a policy of not agreeing to a bailout package unless all the lenders write down their loans.Sri Lanka’s central bank governor P. Nandalal Weerasinghe governor said last week that Chinese debt accounts for 15 percent of Colombo’s overall foreign borrowings. Sri Lanka has asked China to renegotiate the terms of the debt, in line with the IMF’s demand.The views and opinions expressed in this article are those of the author and do not necessarily reflect the position of Sputnik.

Biden’s Lend-Lease: US is Going to Sacrifice Ukrainians at Unbelievable Numbers, Observers Say

Journo: Is It Coincidence That Some CIA Torture Techniques are so Popular With Ukrainian Neo-Nazis?