/ Go to the photo bankIn this handout video grab released by the Russian Defence Ministry, service members of Ukrainian forces who have surrendered at the Azovstal steel plant stand in line in the Russia-controlled port city of Mariupol, Donetsk People’s Republi 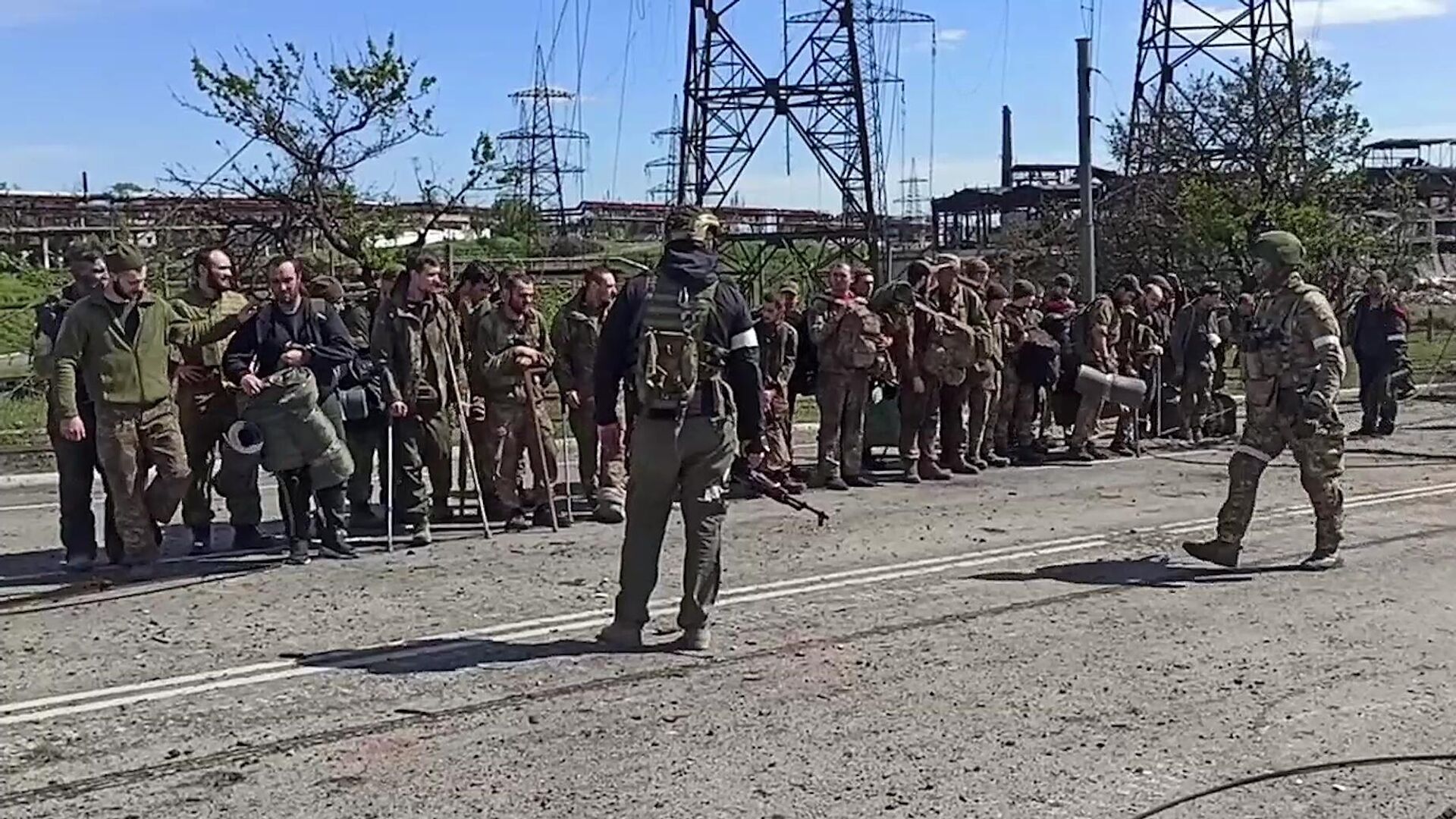 The Azovstal operation sent a powerful message to Kiev and its US backers, presenting a glaring contrast between Ukrainian nationalists’ mistreatment of Russia and DPR POWs and Moscow’s humane approach to those who laid down arms, according to Russell “Texas” Bentley, a US-born Donbass volunteer and war correspondent.Sputnik: What message does the surrender of Azovstal send to Kiev in your opinion? How could it influence the Ukrainian military’s morale and their willingness to fight?Russell Bentley: Сlearly, it’s a huge military victory for the Russian and Donbass forces. Kiev knows it. The United States knows it, and the soldiers of the Ukrainian army know it. The Azov Nazis that were hiding in the Azovstal basements were the most supposedly highly-trained, best-equipped, most close to Ukrainian and US military leadership. And they got smashed. They proved themselves to be cowards as they ordered others to fight to the last bullet and the last man. They themselves surrendered while they still had food, they still had weapons, they still had ammo. They used human shields. When they came out, they were still clean and fat and healthy.And we compare that with Ukrainian army units that have surrendered because they really were out of ammo. They hadn’t had food or water for days. So really it shows – and also it’s very important that since these Nazis have been captured alive, they’ve been videoed. And it’s being very widely spread. Not only so many of them have swastikas and pictures of Hitler tattooed to their bodies, but also genuinely Satanic symbols.And this hopefully will be able to be communicated to the people of the West who are decent Christians so that they can understand. And even if they’re not Christians or at least decent human beings to understand that this really is a battle between good and evil, and it’s the evil of the West using Nazi proxies to attack the good people here. So it’s been a huge victory in every measurement. It has undermined morale in the Ukrainian army. There are now other army units that want to surrender. It has proven who the good guys and who the bad guys are. And it has been a major strategic and tactical victory for Russia and the DPR forces.

Situation in Ukraine’Nazism is Disease’: Texan Came to Donbass to Protect People & Tell the Truth About 8-Year Long War1 April, 05:29 GMTSputnik: Could the surrender of Azovstal cool off the enthusiasm of Western warmongering elites in your opinion?Russell Bentley: Actually, in that respect, I don’t think so, because the people that own and control the United States government, which has nothing to do with the citizens of the United States, they were never interested. They never cared at all about winning this war, their intention and their strategy the whole time since 2014, when they started this war, was to create a Ukrainian failed state, to create another Afghanistan for Russia, and to increase the death and destruction and prolong the conflict there has been their intent the whole time. So, just because the Ukrainians are losing, that’s no reason for them not to pour billions more US taxpayer dollars into Ukraine to flood the country with weapons, to increase the destruction and also to the detriment of the citizens of the United States. So, the people that own and control the US, EU and NATO are going to continue this war, and it is going to require that Russia and Donbass forces completely defeat the Ukrainian army militarily in order to stop the war.© AP Photo / Alexander ZemlianichenkoRussian soldiers walk inside the Ukraine’s Azov Regiment base adorned with the unit’s emblems in Yuriivka resort settlement on the coast of Azov Sea not far from Mariupol, in territory under the government of the Donetsk People’s Republic, eastern Ukraine, Wednesday, May 18, 2022 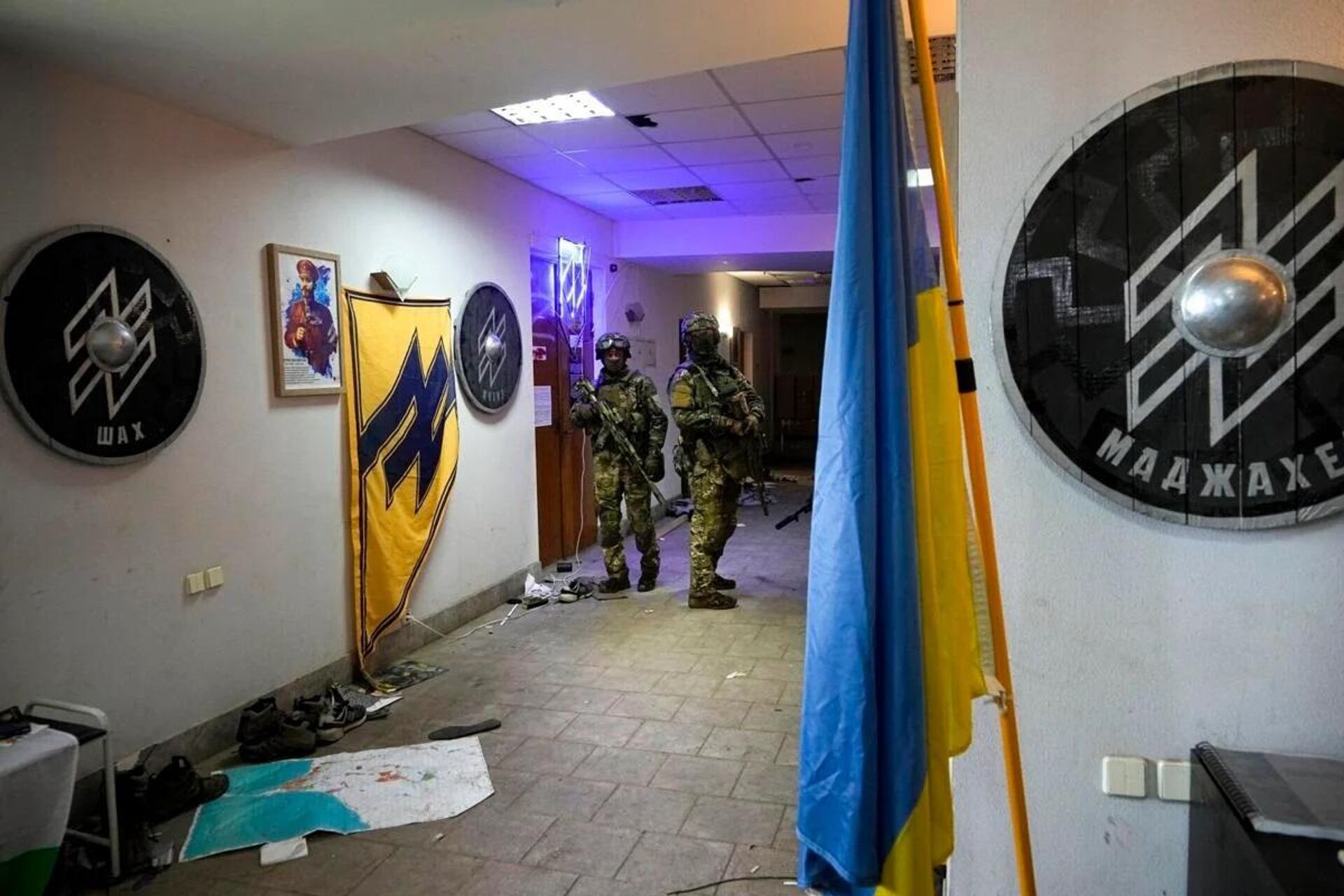 Russian soldiers walk inside the Ukraine’s Azov Regiment base adorned with the unit’s emblems in Yuriivka resort settlement on the coast of Azov Sea not far from Mariupol, in territory under the government of the Donetsk People’s Republic, eastern Ukraine, Wednesday, May 18, 2022Sputnik: What do you think about the Kremlin’s decision not to launch an all-out offensive of Azovstal which could have led to thousands of casualties?Russell Bentley: It was a brilliant decision. I’m very proud to see that it was Vladimir Putin himself who made it. He has proved himself to be a military genius, and it’s very encouraging to know that someone with that depth of knowledge and skills is the leader of our country. By not attacking and not making an all-out offensive on the Azovstal plant, first consideration, we saved the lives of many of our own soldiers.The battalion that I served in, back in 2015, Vostok Battalion, they are the main guys that were surrounding the Azovstal base. So Putin’s decision not to make that assault saved the lives of some of my very good friends, and I’m very happy about that, from a personal perspective. It also saved our ammunition. We were able to capture prisoners that have some very important intelligence information that we will be extracting from them. It’s also will give us more proof that our enemies are genuine Nazis and Satanists and more evidence of their atrocities as they begin to squeal on each other and testify against each other in order to try and get leniency for their own sentences.And it again shows Russia as a humane and merciful warrior. We don’t say like the United States, oh, we’re just going to go in and kill everybody or we’re going to flatten the whole city. We have proven our humanity by multiple times. But this act, again, proves it and it shows that this is a major moral and military and PR political victory. And at the same time, it proves that Russia can have mercy and still win, which is exactly what we’re doing.© PhotoRussell Bentley, a volunteer fighter and blogger from the US in Donetsk People’s Republic 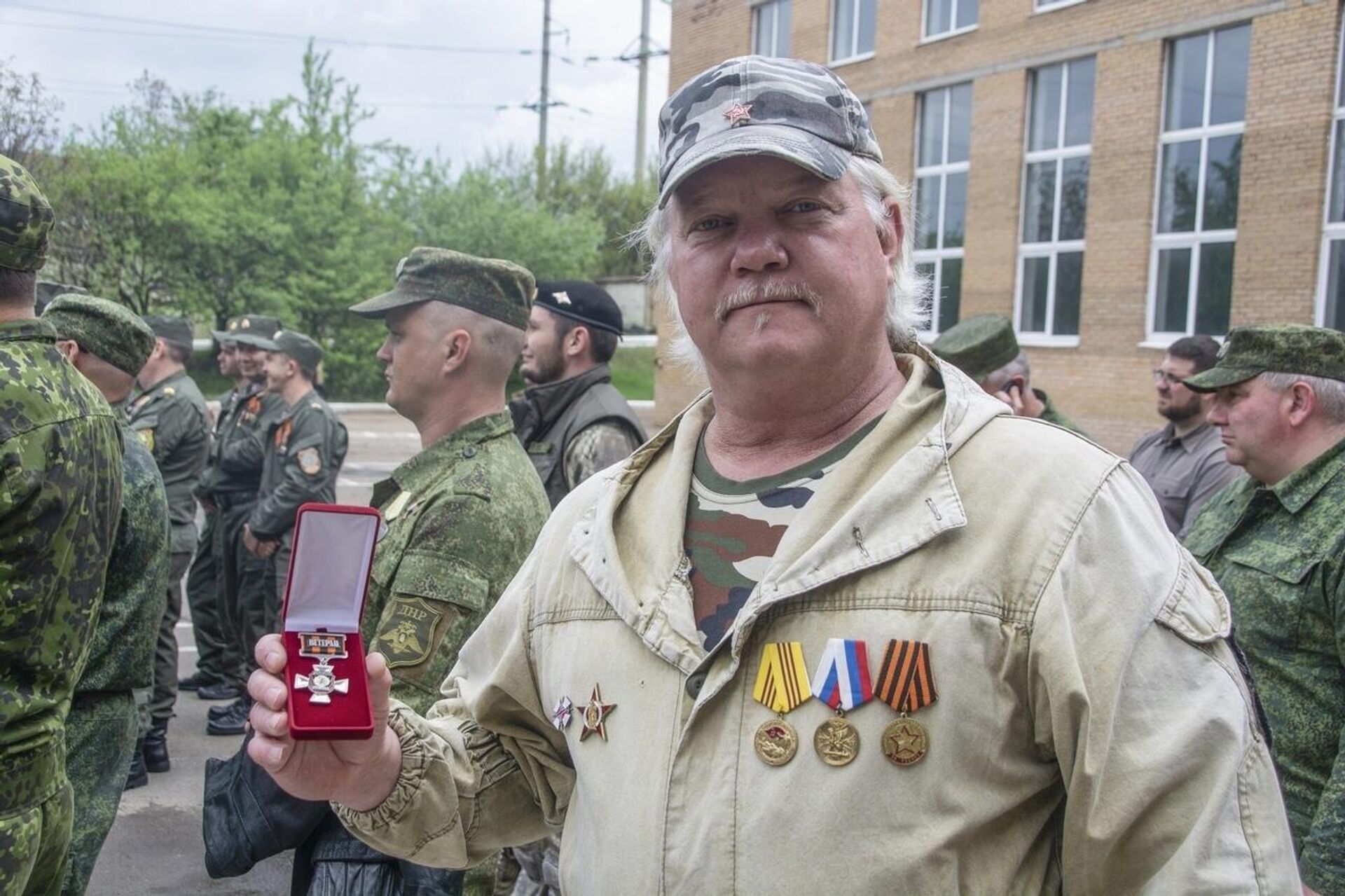 Russell Bentley, a volunteer fighter and blogger from the US in Donetsk People’s RepublicSputnik: Are there any signs of a shift in the Western public’s view of the Russian special operation after Ukrainian fighters’ surrender at Azovstal and reports emerged of torture and killings of Russian POWs by Ukrainian nationalists?Russell Bentley: Yes, there are signs of a shift in the Western public’s view. You understand that, in my opinion, in the United States, more than 95%, 97%, 98% of American citizens are like zombies now. They’re brainwashed. They have no critical thinking skills. They’re politically and historically illiterate. They don’t know, they can’t even remember, before the year 2000, much less, you know, 1939 or 1945. They have no context with which to judge current events and political developments in the world. So their opinion is going to be whatever, they’re told to think by the television and by the complete propaganda of the western mass media.But there are 2-3% of Americans who are educated, who do understand what’s going on. And even though it’s a very small percentage, it’s still eight or ten or 12 million people in the United States that are not only smart enough to understand, but perhaps moral and competent enough to actually do something about it. And those are the people like you and I and Sputnik News that are giving the Russian or humane perspective to the West in the English language. Those are the people that we have to reach, that eight or 10 million people in America that are intelligent enough to understand what we’re saying. So there is a shift. Those people – you can’t argue when you see a guy with a swastika tattoo on his arm that’s wounded and being taken care of with excellent care, by Donetsk People’s Republic (DPR) doctors, by the people that this guy swore that he would massacre if he ever had the chance.© PhotoRussell Bentley, a volunteer fighter and blogger from the US in Donetsk People’s Republic 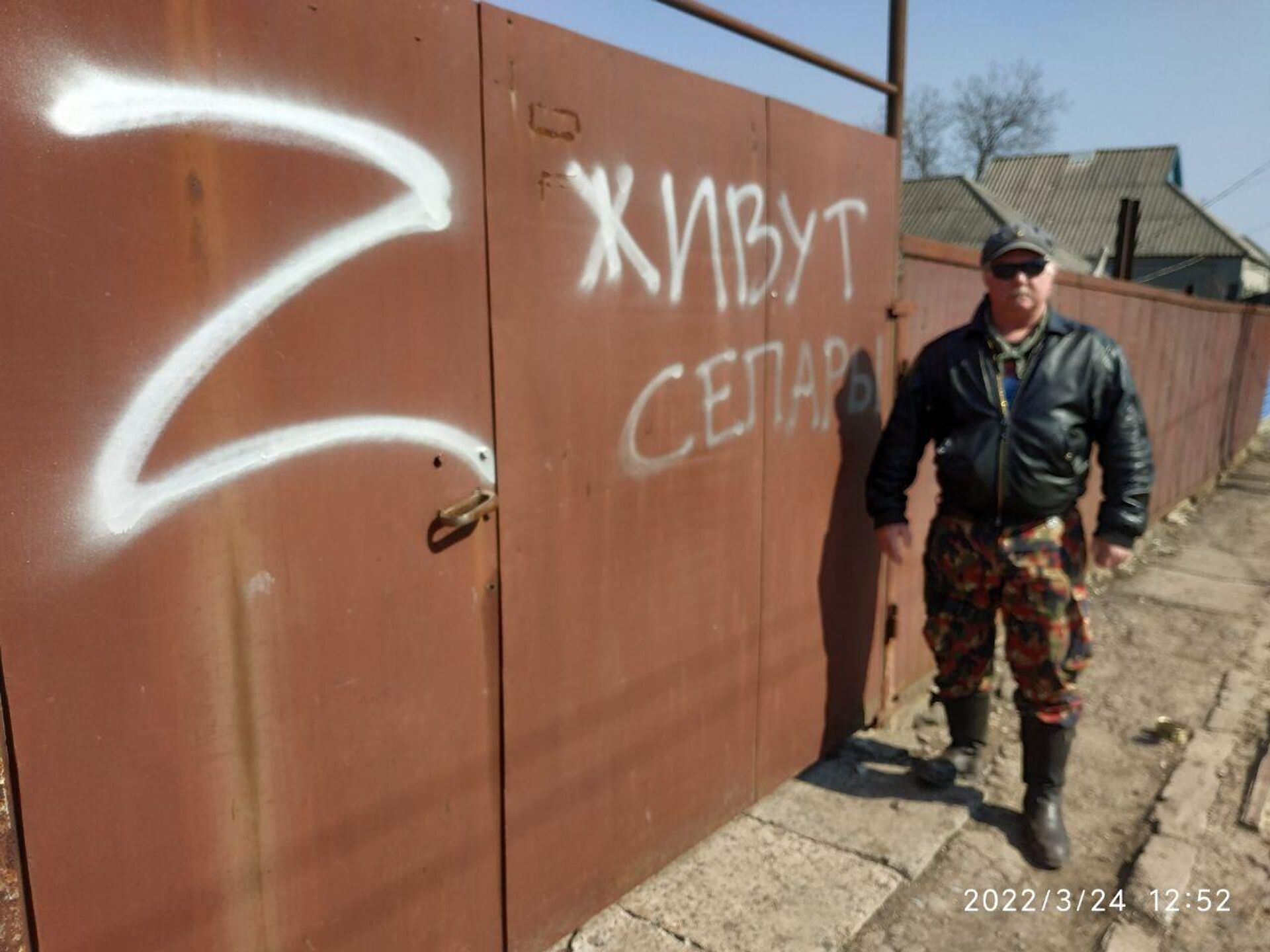 Russell Bentley, a volunteer fighter and blogger from the US in Donetsk People’s RepublicWhen you see the videos of the Azov atrocities, of them cutting prisoners of wars’ throats or shooting them in the legs and letting them bleed to death or carving and branding swastikas into their bodies, you can’t argue with that. It’s not Russian propaganda. It’s not fake. It’s the real deal. That’s what’s really going on. And these people, when they see this… some people just refuse to believe. There are people in the United States that I’ve spoken to about important matters and they literally say: “I don’t want to know.” And those people they’ve given up on their humanity, on their responsibility as human beings, as moral human beings, at any rate. They’ve become like livestock. It’s like you tell a sheep – hey, if you go in that slaughterhouse door right there, they’re going to chop you up. And they’re like: “Well, they’re feeding me. They’ve been nice to me so far, so I don’t care. I don’t want to know.” So yes, there has been a shift in a small amount of people, but it’s absolutely important that we keep hammering the truth into them. And that’s exactly our job.

Trump on Clinton’s Russia Allegations: ‘Where Do I Get My Reputation Back?’

US-UK Rift: Could Differences Between Johnson and Biden Lead to Deep Row Between the Nations?