Speaker of the House Nancy Pelosi (D-CA) arrives at a news conference about the Honoring Our Promise to Address Comprehensive Toxics (PACT) Act on Capitol Hill July 28, 2022 in Washington, DC. 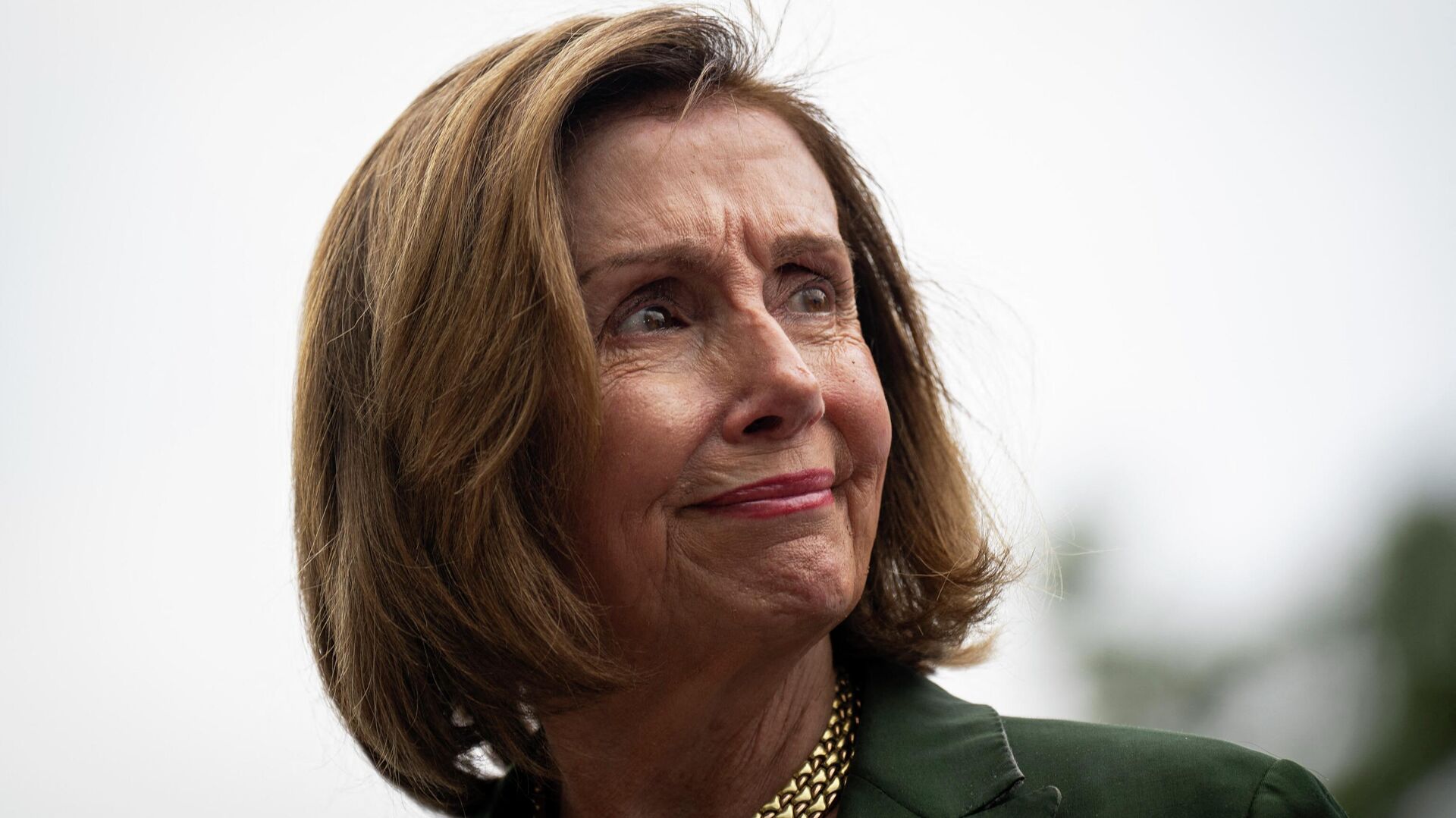 US House Speaker Nancy Pelosi made a provocative trip to Taiwan, which mainland China sees as an inalienable part of its territory. Beijing slammed her visit, stressing that “those who offend China will be punished.” China has also launched military drills around the island to boost its preparedness.Speaking with Sputnik, Adriel Kasonta, a London-based foreign affairs analyst and former chairman of the International Affairs Committee at conservative think tank The Bow Group, said that he views Pelosi’s trip as a “highly irresponsible” thing to do. Kasonta believes the controversy around Pelosi’s trip also distracts attention from the US’ real and internal problems.Sputnik: What do you think about Nancy Pelosi’s provocative visit to Taiwan?Adriel Kasonta: I believe that Nancy Pelosi’s trip to Taiwan was highly irresponsible, as it violated the spirit of the Shanghai Communique of 1972, a diplomatic document issued by the two countries on the last evening of President Richard Nixon’s visit to China. Although many China watchers in the West believe that Beijing exaggerates its anger over this development, we have to bear in mind that Mrs. Pelosi is second in the line of succession to the presidency after VP Kamala Harris.

China’s Xi Tells Biden He ‘Plays With Fire’ With Taiwan Policy in Phone Call28 July, 16:15 GMTTherefore their outrage over this highly symbolic visit is perfectly understandable. The Chinese believe that the US plays with fire by showing a profound disregard for the “One China” principle that defines the PRC as the sole legitimate government of that China, and Taiwan is a part of its province. With that in mind, there is serious doubt if the US will stick to the “One China” policy of strategic ambiguity since the very stance kind of went out of the window with Mrs. Pelosi’s decision to make her trip to Taiwan.Sputnik: Does this mean the US decided to go into a full-scale confrontation with China? Can the US afford being engaged in this?Kasonta: Some say that Mrs. Pelosi’s trip to Taiwan was a perfect example of virtue signalling aimed at portraying Democrats as being tough on China and scoring some points within the Republican Party that is obsessed over Beijing’s apparent threat to the US hegemony in the world. As Gallup poll suggests, President Joe Biden’s approval rating is the lowest for any modern president. Since the midterms are coming, Democrats need this kind of Hollywood bravado stunts to convince the US citizens and their alleged political opponents that they are up for the job of running the country. The controversy around Mrs. Pelosi’s trip also distracts attention from the real and internal problems of the country, like the 41-year high inflation of 9.1%.

US Gets 14 Straight Months of Roaring Inflation Since Biden Administration Dubbed Issue ‘Transitory’15 July, 13:59 GMTOn the other hand, some uber-hawkish voices in the US would love to go to war with the Middle Kingdom as soon as possible. Yet, in my humble opinion, they’re unprepared to face China at the current moment because of the two countries’ enormous economic interdependence. And even if they were prepared, a war between the two largest economies in the world would be disastrous for the Earth’s population, not only in economic terms. The very war could have led to the complete and total destruction of the entire human race.So the question shouldn’t be if the US can afford to be engaged in a full-scale confrontation but rather if the human race can afford it. This is the most crucial question.Sputnik: Does the US have enough military power and allies support in the region to contain China’s influence?Kasonta: There is no doubt that the US is still the most powerful country in the world regarding military power. It also has many clients and vassals eager to participate in its military adventurism around the world (out of sheer irresponsibility or broadly defined profit). Still, I doubt they would all be on board with Washington if the worst comes to the worst. Above all, it depends if Russia will maintain its alignment with China to dismantle

White House Sent National Security Officials to Warn Pelosi of Taiwan Trip Risks – Reports3 August, 21:01 GMTUS hegemony and safeguard the multipolar world order or if it will join the US-led balancing coalition against Beijing. I know that in the current circumstances concerning the conflict in Ukraine and heavy sanctions on Moscow, this perspective seems improbable, but who knows? After all, China and Russia are not natural allies.Sputnik: How can the US assure its allies it would be willing to fulfill what it has promised, when the world saw what happened with, for example, Afghanistan withdrawal, the JCPOA, and lately even breaching the One-China principle with the House Speaker visiting Taiwan?Kasonta: The US has always been a self-serving entity, like any other empire in human history. It only does what serves its own interest and doesn’t care about other countries that simply operate as means to achieve Washington’s ends. It is hard for me to speak on behalf of the US allies that many times failed to learn from their past experience, but one thing is sure: the US will not tolerate any peer competitor. It can try to play Russia against China or, as it is now trying to do, to play China against Russia in terms of pressuring Beijing to openly condemn the Kremlin’s special operation in Ukraine. Still, the Wolfowitz Doctrine is the US empire’s geopolitical sacrosanct. And this has to be remembered in all circumstances.Sputnik: Why is the US being engaged in intense sabre-rattling in the Asia-Pacific and conflict in Ukraine, whereas citizens at home suffer from various crises? Is Washington using its foreign policy ambitions to distract Americans from the real problems and, for example, further justify huge arms deliveries to Ukraine, portraying China and Russia as villains?Kasonta: The US Empire is in ‘relative decline’, as Ray Dalio argues. Having said that, it does what it creates an illusion that this is not the case. By doing so, it tries to set up as many fires as possible to make Russia and China busy while trying to figure out how to prevent this unavoidable fate.

Pelosi’s Taiwan Trip: How US Looks to Maintain Economic Leadership by Undermining Other Regions3 August, 19:15 GMTThe US political elite is less interested in the well-being of its citizens than in ruling over the entire planet and every sovereign nation under the sun. If this weren’t the case, they would have concentrated on internal problems rather than going “abroad in search of monsters to destroy”, as President John Quincy Adams famously said. This donquixotesque attitude poses a serious threat not only to the American citizens but to the rest of us as well. Because of the US’s imperial hubris, the entire human race is caught in a ‘catch 22’ situation.Sputnik: Why are we seeing such a dangerous policy towards China when even experts within the US government warn against doing so, since this risks the collapse of the already vulnerable US-China relations?Kasonta: As I’ve already explained, the US elites don’t care about the relationship with China or any other country. They only care about the ultimate and unrestrained power and maintaining dominion over the entire human race. And only God knows if this hubris will not end up in nemesis.

Biden Went to the Middle East to Solve US Economic Problems, Not Bring Peace, Expert Says

Prof: Russian Gas is Irreplaceable, But If EU Wants More African Fuel It Should Invest First