Athletes from India take a selfie during the closing ceremony in the Olympic Stadium at the 2020 Summer Olympics, Sunday, Aug. 8, 2021, in Tokyo, Japan 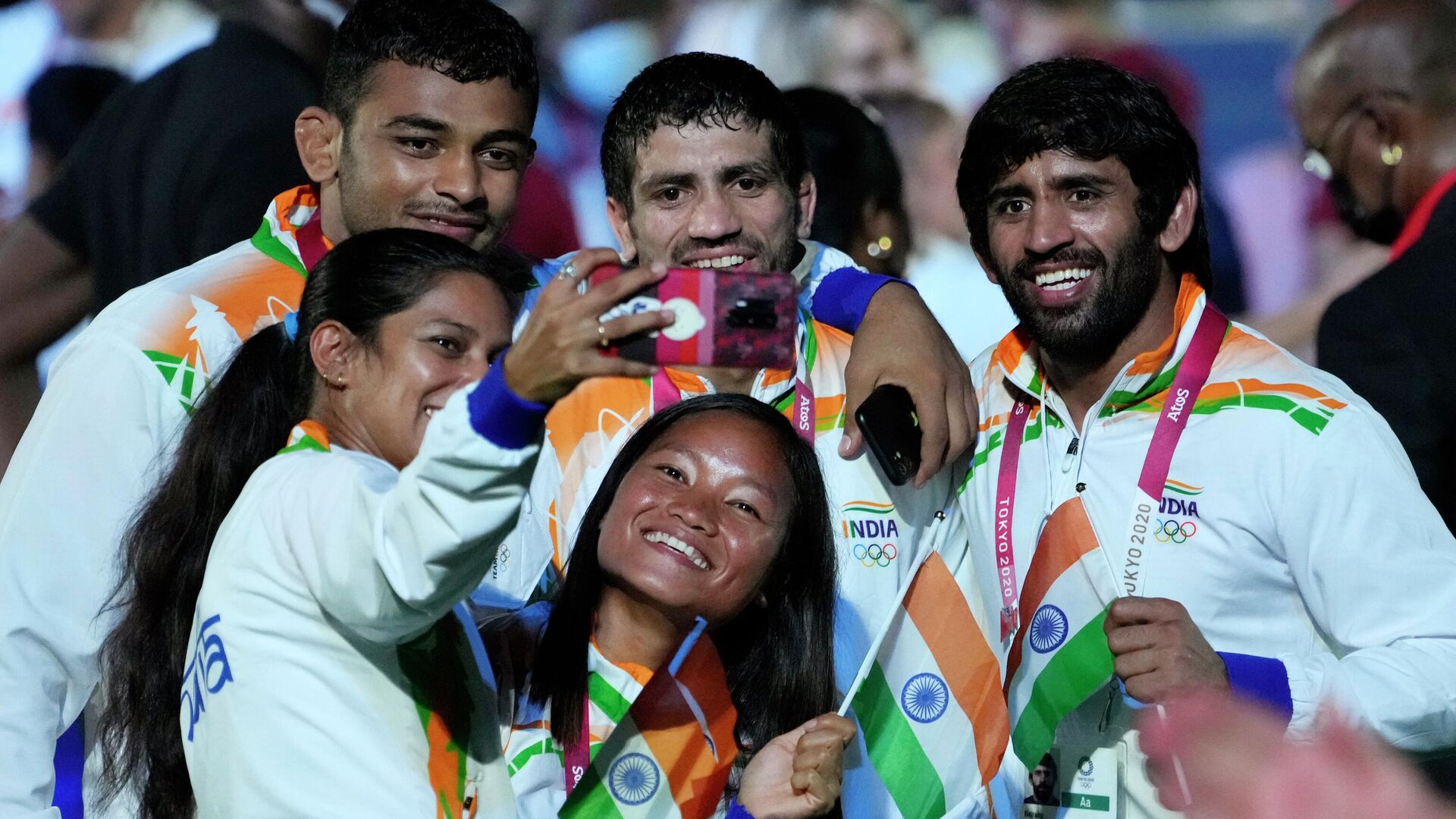 ExclusiveTwenty five years have passed since the signing of a Russo-Indian memorandum of cooperation with respect to physical fitness and sports, and the countries now seek to enhance collaboration by including mass sports, sports science, education, the training of athletes, and the exchange of coaches, Russian Sports Minister Oleg Matytsyn told Sputnik.Earlier this week Russian Sports Minister Oleg Matytsyn embarked on an official visit to New Delhi to hold meetings with his Indian counterpart Anurag Thakur, Indian Olympic Association (IOA) President Dr. Narinder Dhruv Batra, and representatives of Association of Indian Universities (AIU).”India is a strategic partner of Russia in many areas of activity,” says Matytsyn. “Sports are no exception. And the question of strengthening these relations has become especially relevant in light of the sanctions you mentioned, but not only for that matter. We are now making our first visit at the level of sports ministries, interacting with the Indian Olympic Association and the Association of Indian Universities. We are analyzing the programs we have already signed and been implementing. This is, first of all, the memorandum of cooperation. This document will mark its 25th anniversary this year.”

Russia and India are seeking to enhance cooperation in terms of sports, which could include the preparation of athletes for participation in the Olympic Games and World Championships, according to the minister. India is bidding to host the 2036 Summer Olympic Games in Ahmedabad, the largest city in the state of Gujarat. Russia has lauded India’s plans and is ready to lend the country a helping hand, given its experience and expertise in holding major international events, according to the minister.”Russia has hosted virtually all major international competitions, including the Universiade, FIFA World Cup, World Athletics Championship and Winter Olympics,” says Matytsyn. “We are always open for cooperation. We are always ready to share our experience in such competitions as the Olympics. We have done this on more than one occasion. So, if the decision is made, of course, Russian specialists will be glad to help in organizing the Olympic Games in India.”© AFP 2022 / JACK GUEZSilver medalist India’s Kumar Ravi, gold medalist Russia’s Zavur Uguev, bronze medalist Kazakhstan’s Nurislam Sanayev and bronze medalist USA’s Thomas Patrick Gilman pose with their medals after the men’s freestyle 57kg wrestling competition of the Tokyo 2020 Olympic Games at the Makuhari Messe in Tokyo on August 5, 2021 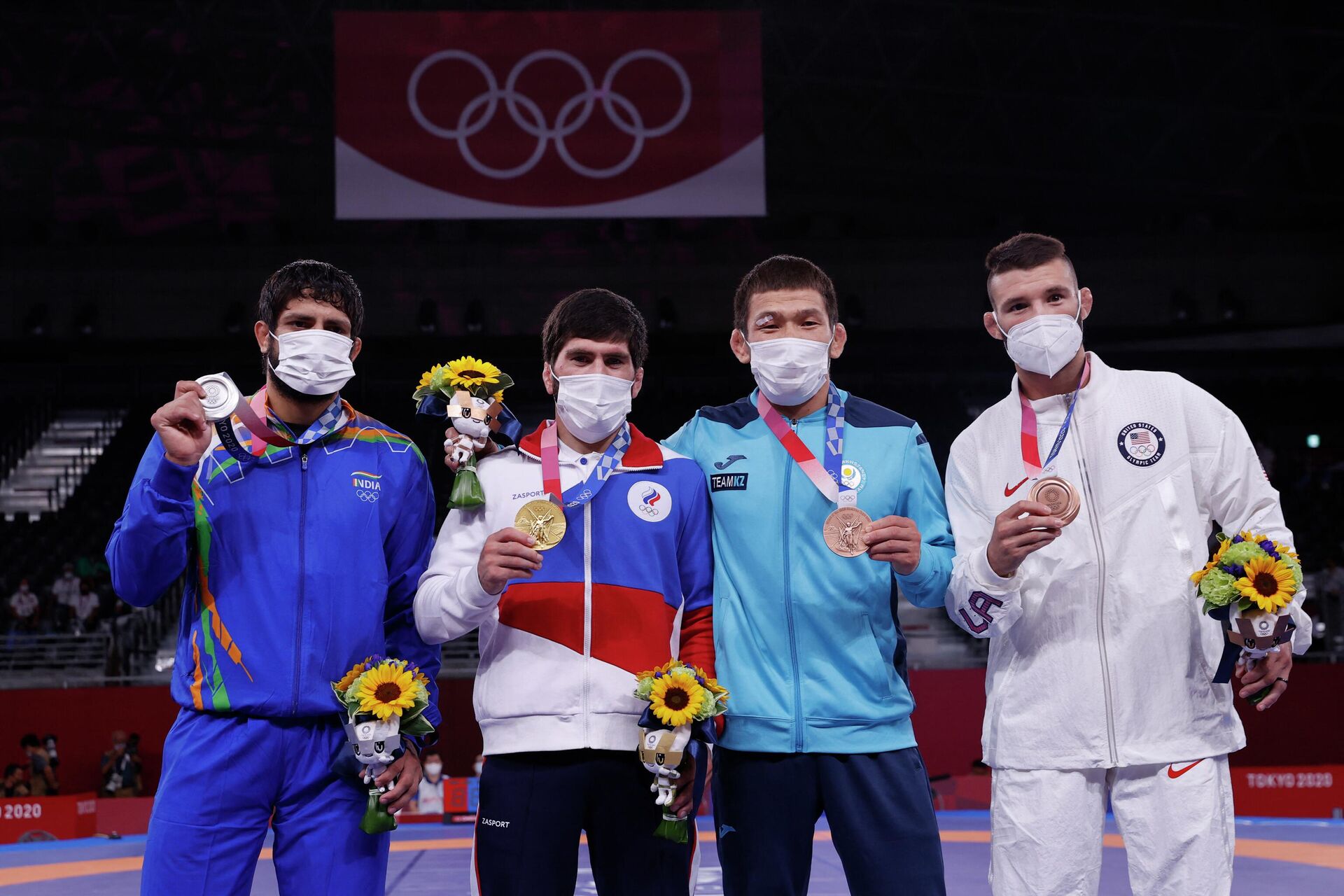 Yet another important field of cooperation is bilateral exchanges and the training of athletes, according to Matytsyn. India is affluent in terms of climate and geography, encompassing six climatic zones which range from tropical in the south to temperate and alpine in the Himalayan north. This provides a unique opportunity for training, given that Moscow sees the need to expand the training locations for Russian athletes, according to the minister.

"In certain disciplines, where our Indian colleagues have experience in training and where favorable climate and geographical conditions exist, we will plan to hold training sessions," he says.

For their part, Indian wrestlers and discus throwers are planning to come to Russia for training in the near future. Matytsyn asserted to Sputnik that neither Western sanctions nor unfolding geopolitical tensions would affect the country’s plans to host Indian athletes.”Our plans with regard to athletes and coaches from India remain unchanged,” he says. “We will hospitably organize joint training camps in Russia and share our experience in the disciplines where we have achievements and where we have appropriate training conditions. We will be more active in our policy of cooperation, since it is aimed at the development of sports in general. Sports are not just a big declaration; sports are an ambassador of peace. It is indeed a very powerful factor in bringing people closer together and uniting them.”The two countries are also planning to deepen cooperation in the field of university sports, the minister notes. In addition, Russia possesses extensive experience in organizing volunteer movements, as well as studying and promoting sports as an important component of the educational system. Russian and Indian specialists have already expressed mutual interest in collaborating in the aforementioned fields and are ready to take the first steps on the path to implementing the programs, the minister notes.

What’s more, India and Russia are members of BRICS – the acronym for the club of Brazil, Russia, India, China and South Africa – which pays great attention to sports, emphasizes Matytsyn. Nearly two years ago, the ministers of sports of the BRICS held a virtual meeting and signed a Memorandum of Cooperation in the field of physical fitness and sports.”Next year we plan to propose setting up games within BRICS,” says Matytsyn. “We have not decided yet which category of athletes will be there – professional ones or university teams. However, we see that regarding students, there are many university clubs in the BRICS countries. This means Russia, China, India, and, of course, South Africa. Therefore, there is a great potential. The main thing is that the leaders of our countries, Vladimir Putin and Narendra Modi, have the highest regard for sports, so it is a major component of their respective national policies.”Russia is aiming to further strengthen the national sports system regardless of growing pressure from the West, Matytsyn underscores. Instead of crippling Russian sports, Western sanctions have provided the country with an opportunity to regroup, assess its resources and give a boost to further development, according to the minister.”This is exactly the objective of the anti-crisis measures plan that we have offered to the Russian federal government in several stages,” he says. “In particular, as I have already said, it involves expanding the list of competitions, including an open format, by inviting friendly countries. With the possibility of hosting [games] within the BRICS, and within the Shanghai Cooperation Organization, we will continue to implement projects with our partners from the CIS countries. The first games were held last year, and we intend to hold them next year as well.”© AP Photo / Martin MeissnerGold medalist Neeraj Chopra, of India, poses during the medal ceremony for the men’s javelin throw at the 2020 Summer Olympics, Saturday, Aug. 7, 2021, in Tokyo 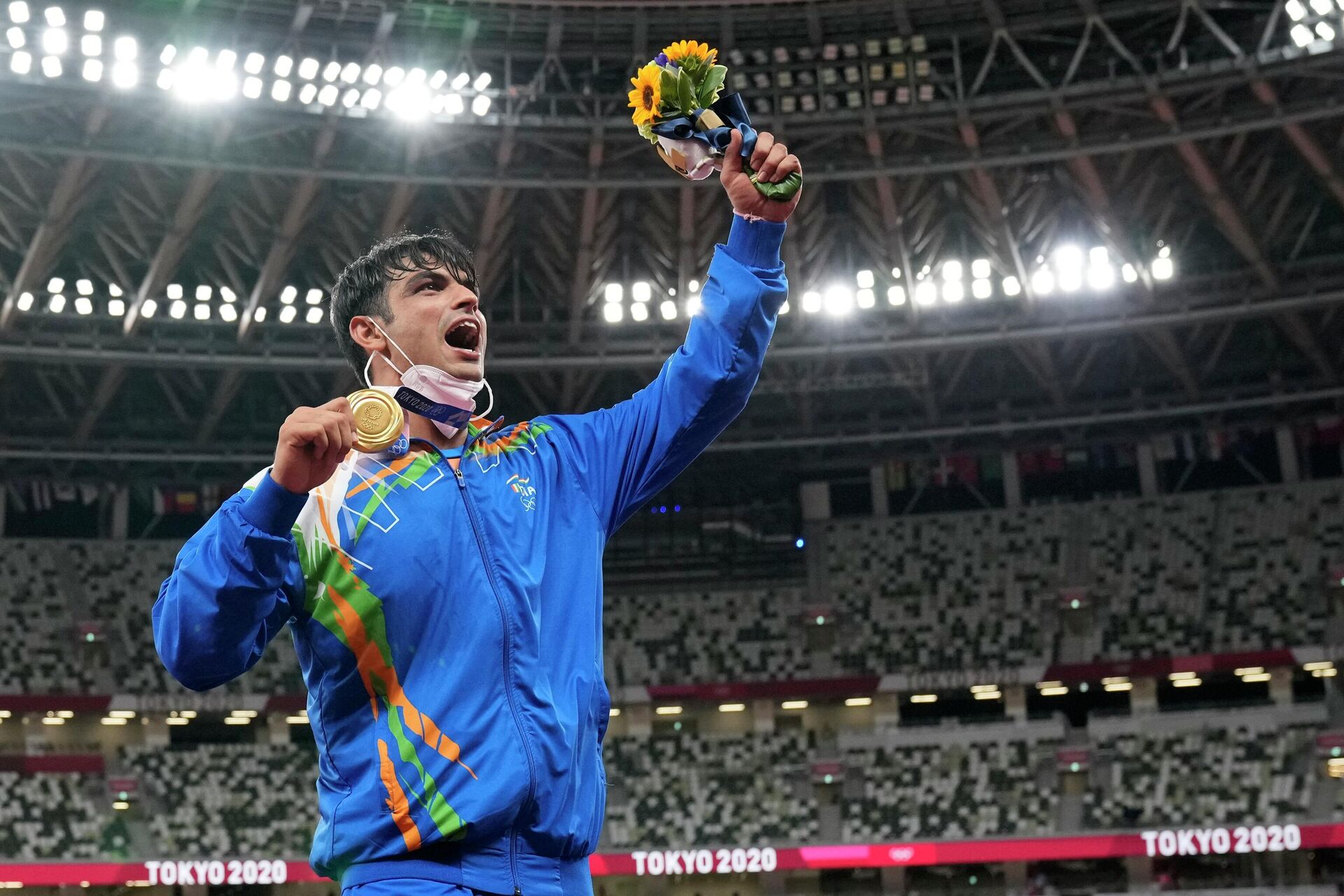 Gold medalist Neeraj Chopra, of India, poses during the medal ceremony for the men’s javelin throw at the 2020 Summer Olympics, Saturday, Aug. 7, 2021, in Tokyo

In the immediate future Russia and India are planning bilateral exchanges between universities and university teams, according to Matytsyn.”I think this has a lot of potential,” the minister says. “All the more so because universities also have sports infrastructure, and both the Russian Federation and India have experience holding these events. The important thing is that it is not only a sporting component, but also a cultural and educational exchange. We realize that students are the leaders of the future. The future of our countries’ relations depends on the extent to which we can shape their needs and interactions with India. Therefore, we will focus our attention today on university sports, but we will not rule [professional sports] out.”According to Matytsyn, India has immense potential and has every chance of emerging as an Asian and world sports leader. The country is already making progress: it finished 48th in the medal tally in the Tokyo 2020 Summer Olympic Games, its highest ranking in over four decades. If the ranking went by the total number of medals India would have finished 33rd.Matytsyn explains that a basic condition for competitiveness is the development of both summer and winter sports, the creation of scientific and educational institutions, a system for training personnel, as well as the selection of talented athletes.”Given the rapid pace of India’s development in terms of technology and the university community and attention to sports, I see nothing impossible,” he says. “Of course, it will take time. It will require very close cooperation with the leading sports countries, and learning from their experience. But if the task is set, I repeat, and it is, shall we say, centrally managed to achieve this goal, I think it is possible, in the near future, to see competitive athletes from India in the Asian region.”Matytsyn’s interview with Sputnik took place on June 21, which was proclaimed by the United Nations as the International Day of Yoga in December 2014 at the request of Indian Prime Minister Narendra Modi. Yoga is a set of physical, mental and spiritual disciplines which originated in ancient India about 5,000 ago.Addressing Sputnik’s Indian audience, Oleg Matytsyn said:”Bearing in mind the nature of our conversation and the fact that it’s taking place on the International Day of Yoga, I would like to wish everyone health, peace and harmony. So, my wish is that you all get involved in sports. As we say in Russia, sport must become a way of life. It seems to me that sports is a model of life. And the principles that apply in sports, if you follow them, they will help you become successful in other spheres of activity.”