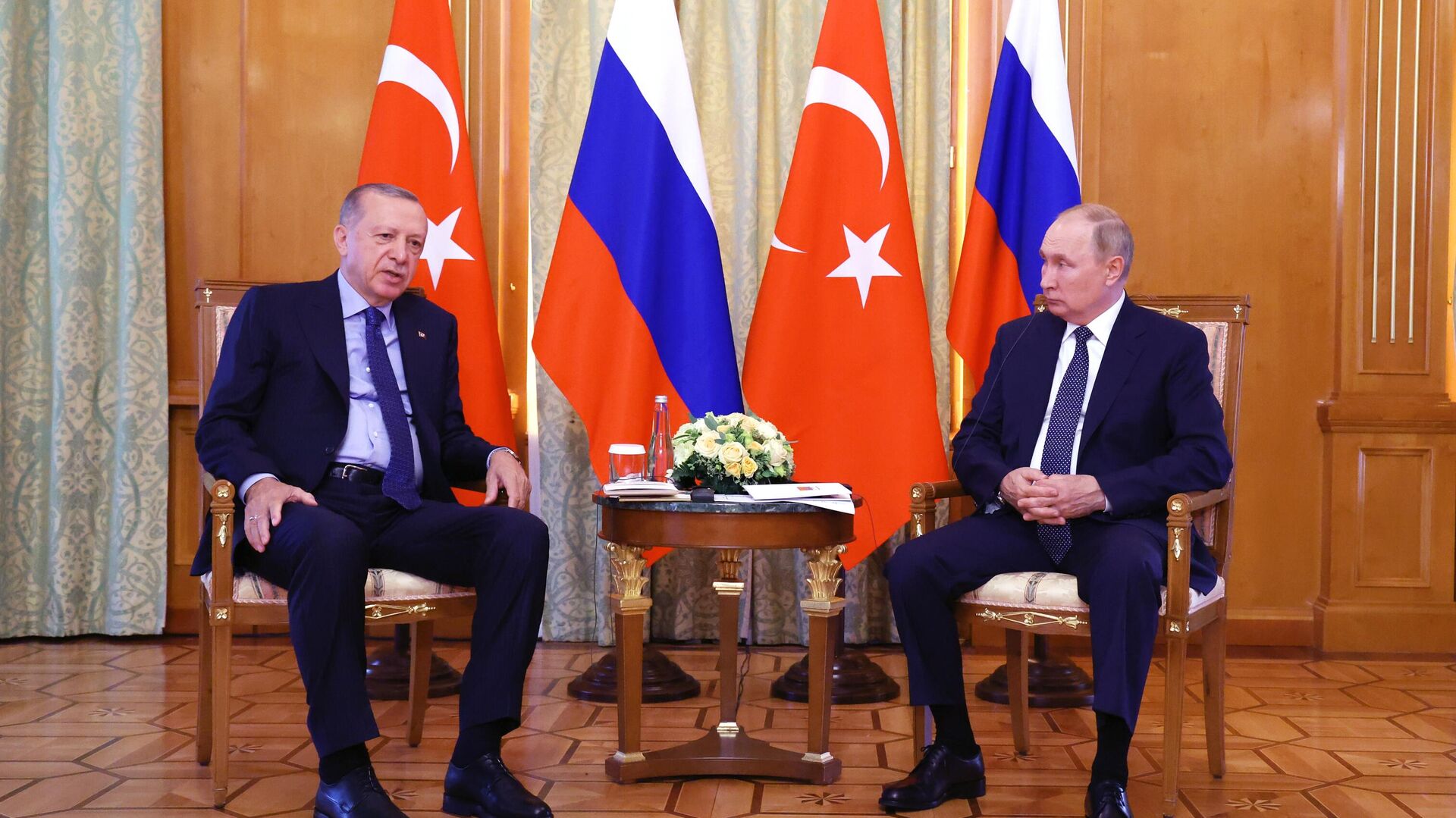 The Russian and Turkish presidents met in Sochi, Russia on Friday to discuss a range of pressing issues, including the implementation of the Turkish and UN-mediated Russian-Ukrainian grain deal, the situation in Syria, trade, and other matters.Russian President Vladimir Putin and his Turkish counterpart Recep Tayyip Erdogan have agreed on a scheme under which Ankara will be able to pay for part of its Russia-sourced natural gas in rubles, Deputy Prime Minister Alexander Novak has indicated.

"An important component was discussed – the delivery of gas to the Turkish Republic, which is supplied a rather large amount [of Russian gas] – 26 billion cubic meters per year. During the negotiations, the presidents agreed that we will begin to deliver part of the gas for rubles," Novak said, speaking to reporters on Friday and summarizing the results of the negotiations in Sochi.

“In the first stage, part of the gas will be paid for in Russian rubles. This is indeed a new stage [of relations], new opportunities, including for the development of our monetary and financial relations,” Novak added.The official did not provide any further details on the gas issue, but indicated that Putin and Erdogan had also reached “big agreements” in the banking sector. “Today…very important decisions were reached which in fact take the development of our relations in trade, in the economy in almost all sectors to a new level,” Novak said.The deputy prime minister also pointed to the Russian-Turkish goal of reaching the equivalent of $100 billion in annual trade, efforts to simplify trade and business ties, plus agreements in the industry, agriculture, tourism, IT, utilities, and energy sectors.Russia sends natural gas to Turkey via two major pipelines – Blue Stream and TurkStream. The pipelines, which run under the Black Sea, have a total capacity of over 46 billion cubic meters of gas per year, and allow Gazprom to use part of the network to send gas further west to Europe. Russia accounted for about 45 percent of Turkey’s natural gas imports in 2021, and the two countries have sought to expand, rather than reduce, cooperation in the energy sector in the wake of the security crisis in Ukraine.

Russian & Turkish Presidents Meet in Sochi12:48 GMTRussia and Turkey are no strangers to trade in national currencies, signing an agreement on the development of a ruble-lira settlement system in 2019. A year before that, Erdogan said that Turkey would be paying for its S-400 air defense systems in rubles or lira instead of dollars.The Turkish lira has suffered a major slide in relation to the dollar, the euro, the ruble, and other currencies over the past seven years amid the Erdogan government’s debt and money-printing-heavy development strategy, which includes low interest rates meant to boost growth, with the side effect being rampant inflation.Along with gas, the two countries are also cooperating in the nuclear energy sector. Russia’s Rosatom announced last month that the first reactor of the 4,800MW nuclear power plant being built at Akkuyu, southern Turkey will be completed in 2023. Once up and running, the plant, partly built by Turkish contractors but financed mostly by Russian state investment, is expected to generate as much as 10 percent of the country’s electricity when fully operational.Putin and Erdogan discussed a range of issues during Friday’s meeting in Sochi, including the security crises in Ukraine and Syria, grain exports, Turkey’s aspirations to join the BRICS group of nations, and economic matters.Turkey did not join its US and NATO allies in slapping sanctions on Russia over the escalation of the security crisis in Ukraine this spring, and has continued to cooperate economically with Moscow while also trading with and sending military assistance to Kiev, including its trademark Bayraktar ground attack drones.