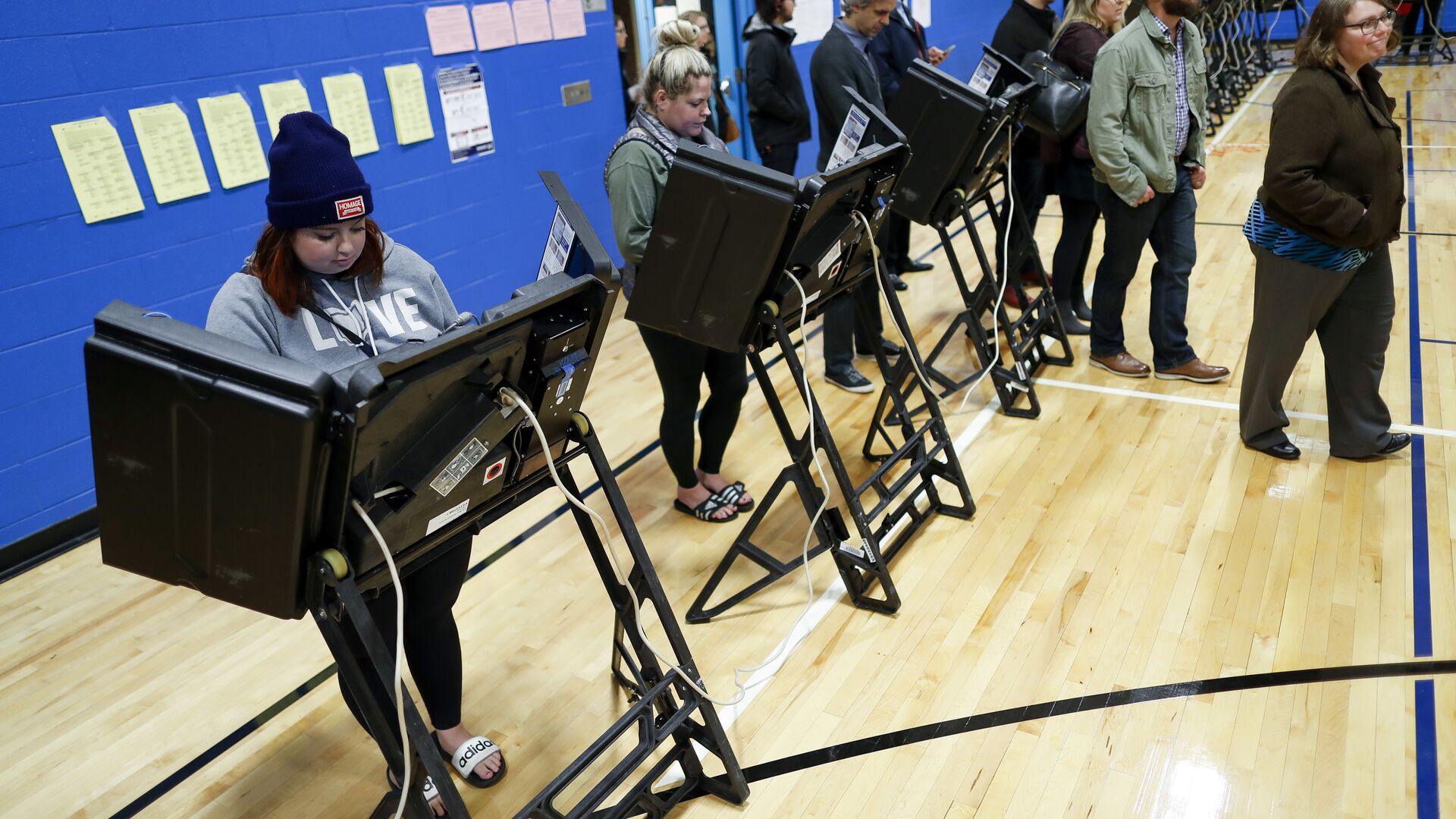 Joe Biden has become increasingly toxic for the Democratic Party which is bracing itself for the gloomy November mid-terms. Yet, all is not lost for the Democrats, as the GOP has a bad habit of snatching political defeat from the jaws of victory, notes the Democracy Institute’s founding director, Patrick Basham.Sputnik: The Washington Post recently published an op-ed eloquently headlined “Quit, Joe, Quit! Biden could save the mid-terms with a one-term pledge”. Has Biden become toxic for the party ahead of the mid-terms? Could a one-term pledge really save the Dems?Patrick Basham: Without question, Joe Biden is a very unpopular president. Not only Republican voters, but politically independent voters, too, overwhelmingly disapprove of his performance. Crucially, Biden’s critics now include several demographic groups considered part of the modern Democratic Party’s voter base and therefore essential to a successful Democratic Party or candidate’s campaign. These are young voters, Hispanic voters, and young, male Black voters. The most dramatic movement away from the Democrats is among working class Hispanic voters who blame Biden and the Democrats for the new economic recession and high inflation and also detest the Democrats’ woke, ‘progressive’ policy agenda on crime, education, and gender.So, yes, Biden is toxic for his party in competitive races at the state and congressional levels. For example, Democrat candidates in these types of races are rejecting offers from the White House for these candidates to campaign personally with Biden in their respective states and districts. Many are using the excuse that their schedules do not permit time for an event with the president. One may be certain that, if Biden were highly popular with Americans, these candidates would be begging the White House for his endorsement and his face-to-face support in their campaigns.

Six Democrats Abstain or Refuse to Back Biden as 2024 Candidate Amid Looming Midterms 3 August, 15:29 GMT

The best illustration of Biden’s unpopularity is perhaps that the vast majority of Democratic voters do not want him to run for a second term in office. Nevertheless, a one-term pledge from Biden to not seek reelection in 2024 would not save his party from defeat in this November’s mid-term congressional elections. Most voters would heave a collective sigh of relief that Biden’s failed presidency would not continue beyond 2024, but they would not demonstrably reward his party for getting rid of him.

The fundamental problem for the Democrats is that the country is neither peaceful nor prosperous, which is the traditional recipe for electoral success at the national level. The American economy is in recession, inflation is high and rising, violent crime is rampant, illegal immigrants pour across the nation’s southern border, and America is spending several tens of billions of dollars to prop up the losing side of an increasingly unpopular European war.American voters want to punish the Democrats for what they perceive to be a wasted two years in office. Whether Biden says he is leaving office in two or six years will not affect most voters’ calculus about how to cast their ballot this year.© AP Photo / Evan VucciVice President Kamala Harris, left, and Secretary of State Antony Blinken, right, listen as President Joe Biden delivers a speech on foreign policy, at the State Department, Thursday, Feb. 4, 2021, in Washington. Vice President Kamala Harris, left, and Secretary of State Antony Blinken, right, listen as President Joe Biden delivers a speech on foreign policy, at the State Department, Thursday, Feb. 4, 2021, in Washington.Sputnik: You noted that the political problem for the Biden administration is less an ideological one than a performance-based one. What are the main reasons for the administration’s ineptitude on almost all policy fronts? Is it simply incompetence, or a bloated apparatus, problems pertaining decision-making, deep polarization between the GOP and the Dems in the US Congress or something else?

Patrick Basham: The fundamental reason that voters have soured so badly, and so quickly, on President Biden, vice-president Kamala Harris, and the Democratic-run Congress is that they appear so incompetent and also so arrogant. Voters will forgive policy mistakes if those making the mistakes are clearly well-intentioned; there is no obvious right or wrong policy choice, and the policymakers acknowledge their mistakes and learn the appropriate lessons from them.

Unfortunately for Biden, Harris, and the Democrats, none of those “get out of policy jail” cards apply to them. Both during the 2020 campaign and while in office, they have made endless blanket promises about how they would “end COVID”, “get America out of recession”, “raise real wages”, “stand up to Russia and China”, etc. In each case, to date they have failed, and often quite miserably.

Yet, no one in the administration or on Capitol Hill ever admits to a mistake or apologizes for anything. So, inflation is blamed on Vladimir Putin and Big Business, the Afghanistan withdrawal debacle is blamed on Donald Trump, the word “recession” is redefined so that officially America is not actually in one. The list seems endless.There are many reasons for such incompetence, but three interrelated reasons stand out. First, a great many senior Biden administration officials have impressive resumes, but they lack successful track records. Biden, himself, epitomizes this problem. As Barack Obama put it once, and I am paraphrasing, “Never underestimate Joe’s ability to screw things up.” Second, a great many administration staffers are quite young – that is, in their twenties and early thirties. Many have lots of political experience, yet simply lack the real-world life experience to advise their officials and administer their portfolios properly.Third, compared with previous Democratic and Republican administrations, within the Biden administration there appears to be a low level of knowledge about very important areas, such as foreign policy, public health, commerce, business, and law. The best illustration at present is the Ukraine-Russia conflict: most of the Biden administration’s many substantive, strategic, and tactical mistakes have occurred because throughout the administration there was, and there still is, a deep ignorance of contemporary Russia, especially Russian politics and the country’s economic strengths.

WorldIs Biden’s Guidance on Abortions an Effort to Galvanize Dems’ Base & Take on SCOTUS?15 July, 18:52 GMTSputnik: A Democracy Institute poll indicates that the Dems’ attempt to galvanize American voters on the Supreme Court’s reversal of Roe and Ukraine crisis has so far failed. What’s behind the Dems’ miscalculation? When did the Dems start to break from reality, given that they similarly failed to predict Trump’s win in 2016?Patrick Basham: The Democrats’ mistaken belief that the Supreme Court’s abortion decision, for example, would help their electoral cause stems from a massive misunderstanding of how abortion plays out in American elections.Democrats think that because most Americans think abortion should be legal, they support abortion in all circumstances, which is the position of most Democrat politicians. However, although Americans do favor legal abortion during the first trimester of a pregnancy, they mostly oppose abortion during the second and third trimesters. Furthermore, pro-abortion Americans always vote in every election, and they always vote for the Democrats. So, the issue does not bring the Democrats any additional or new voters.On the contrary, the issue actually galvanizes anti-abortion voters to support the Republicans. That is because almost all of those voters who vote solely on the basis of this issue vote Republican. In 2016, 80 percent voted for Trump over Clinton; in 2020, 90 percent voted for Trump over Biden. To make matters worse for the Democrats, these single-issue, anti-abortion voters are not habitual voters; they vote if and when the issue is on the ballot, literally or figuratively speaking. And, when they do so, as they will this year, they vote Republican.© AP Photo / Ross D. FranklinFILE – Former President Donald Trump points to the crowd as he arrives to speak at a rally July 22, 2022, in Prescott, Ariz. 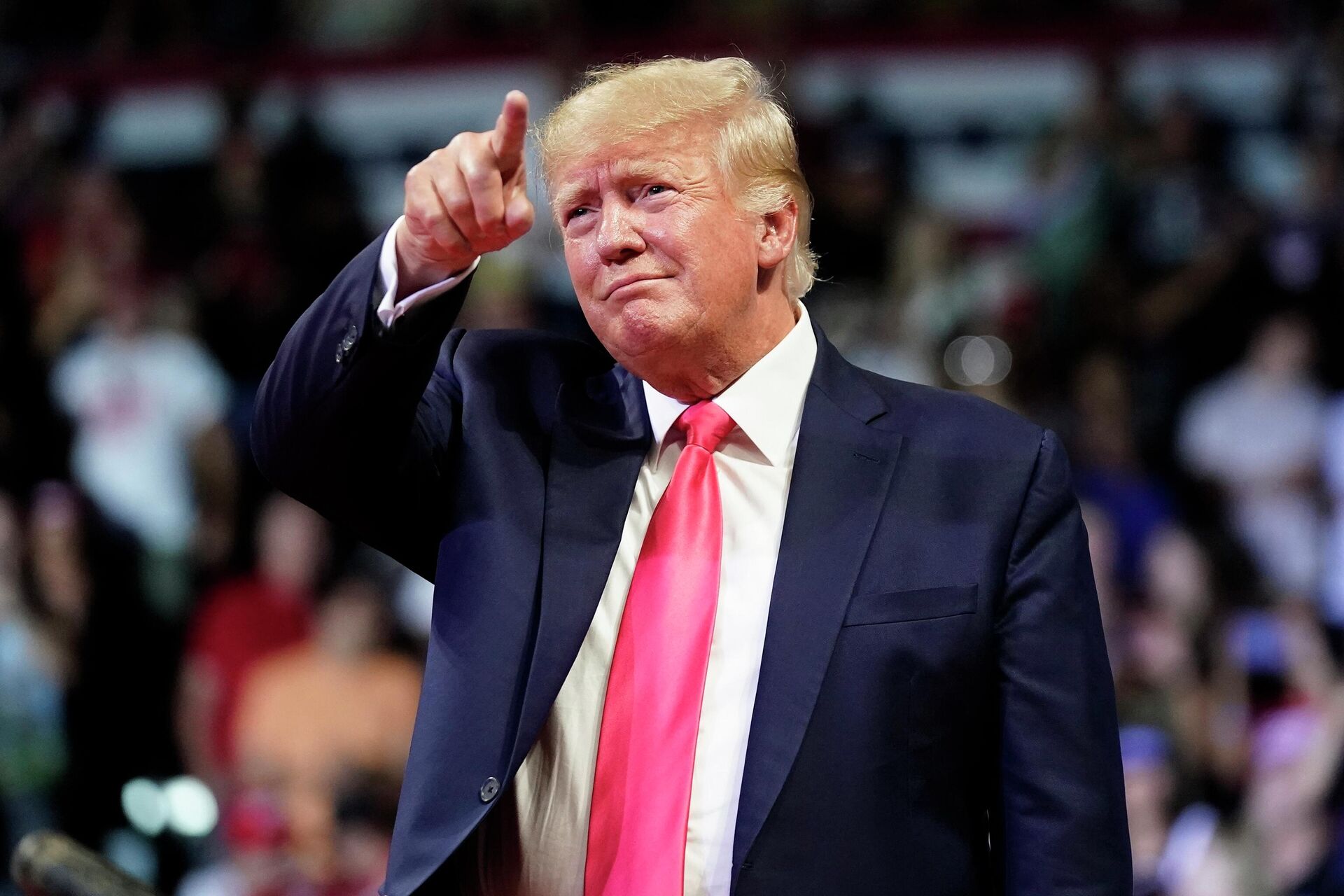 FILE – Former President Donald Trump points to the crowd as he arrives to speak at a rally July 22, 2022, in Prescott, Ariz.Sputnik: The Democracy Institute’s poll shows that for the fourth month in a row, Trump leads Biden in a hypothetical rematch of the 2020 presidential contest. Likewise, the Republicans enjoy a significant advantage in voter enthusiasm across much of the country, the survey says. Does this mean that a GOP victory in November is imminent? Do the Dems still have an opportunity to turn the tables on the GOP?Patrick Basham: It is hard to foresee anything other than a comfortable Republican victory in November. On present trends, the Republicans should gain a large majority of seats in the House of Representatives. In the Senate, the final outcome will be quite close, but the Republicans are still favored to win a narrow majority of Senate seats.Everything is looking good for the Republicans for a couple of reasons. First, everything that can go wrong for the Democrats has done so, be it the economy, foreign policy, crime, immigration, or education. Second, the Republicans have given the Democrats and their media allies little to aim at. The Republicans have successfully kept the public spotlight on the Democrats’ poor record, rather than upon themselves and whatever they would or would not do should they be returned to power.Third, a great many voters, to their own surprise, are comparing the Biden presidency with the preceding Trump presidency and drawing the conclusion that Trump was a much better president than they had realized and, crucially, a better president than Biden is today. Such “buyer’s remorse” can only hurt the Democrats’ chances.Yet, all is not lost for the Democrats. There are still more than three months until Election Day and, as former British Prime Minister Harold Wilson famously said, “A week is a long time in politics.” The Democrats best hope is that the Republicans shoot themselves in the foot, politically speaking, during the next 14 weeks. That is an entirely plausible scenario, as the Republican Party has a bad habit of snatching political defeat from the jaws of victory!Could the Democrats come from behind and gain victory this fall? It is certainly possible, especially in the Senate, but it is unlikely. With all of the policy problems befalling Biden and his party, and with all of the partisan enthusiasm and energy on the Republican side, the Democrats still face an uphill, quite daunting electoral challenge to catch-up with their opponents.

Abbott Halting Baby-Formula Production at Plant in Michigan After Floods

Confirmed Monkeypox Cases Rise to 156 in US