Transport for London workers help commuters get onboard buses, during a strike by members of the Rail, Maritime and Transport union (RMT) 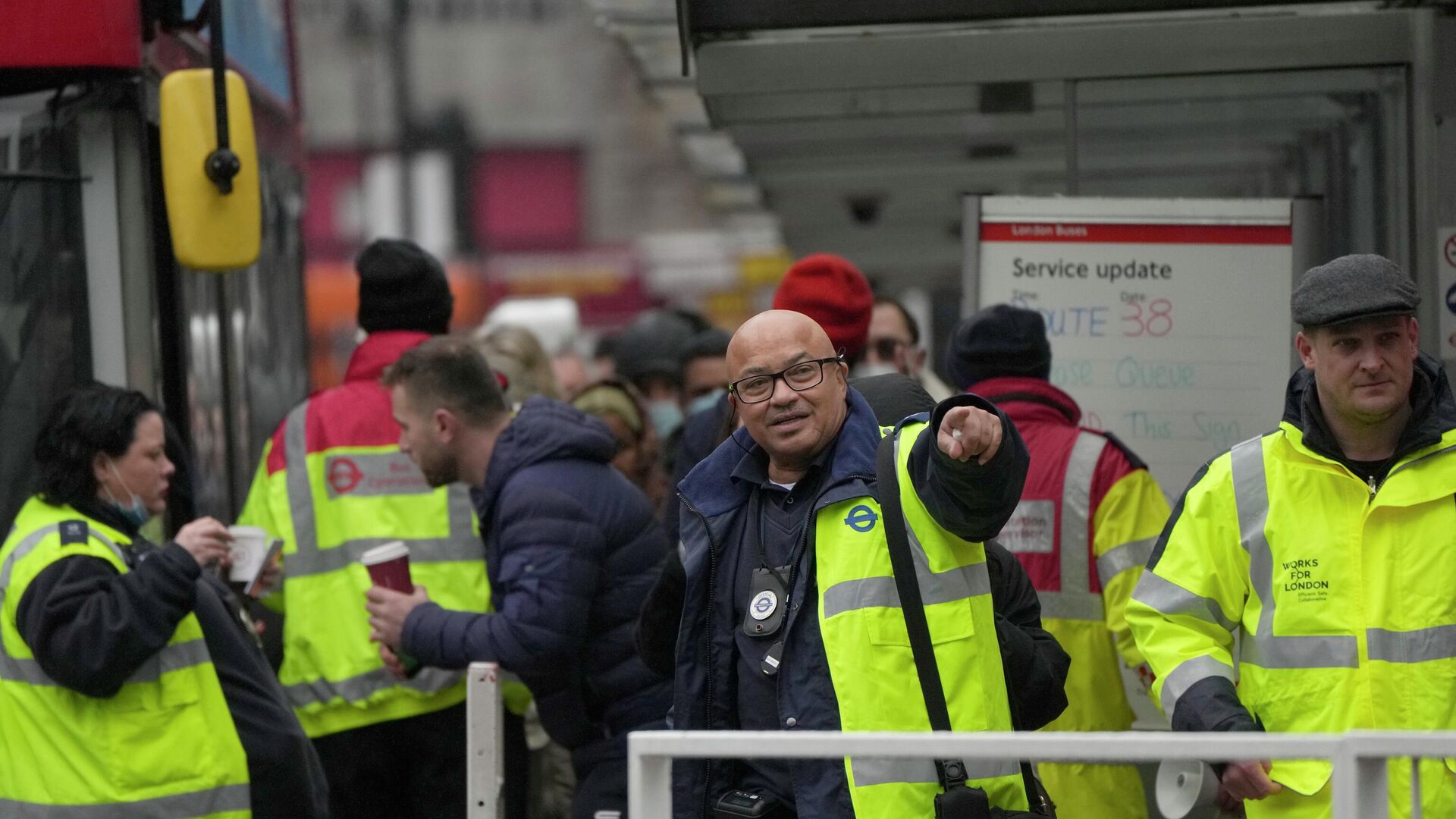 UK Prime Minister Boris Johnson has called for a “sensible compromise” on the pay demands by workers’ unions and accused trade unions of “harming the very people they claim to be helping,” as tens of thousands of railway workers walked off the job in Britain on 21 June. We look at what’s behind the premier’s offer.”I don’t think that the government is in a mood to compromise,” says Steve Hedley, senior assistant general-secretary of the UK National Union of Rail, Maritime and Transport (RMT) Workers. “I think they want to punch the trade unions as a distraction from what’s going on with the cost of living crisis, and the partygate crisis. They think it’s going to be popular taking on the trade unions with their hardliners to do this.”Hedley notes that the latest pay rise that the government offered is around 3 percent which would be, however, accompanied with job cuts. The UK’s present inflation rate is roughly 9 percent and is projected to reach 11 percent in the autumn. The British unions insist that wages should be raised in line with rocketing inflation amid the cost of living crunch.

"The real value of people's wages has gone down in the past three years by about 20 percent because there's been a pay freeze and there's been rampant inflation," explains Hedley. "So we've got to keep pace with inflation. Or again, this year our people will have a real pay cut; not just our people, but workers right across Britain."

UK Observers: PM’s Cabinet’s Reaction to Rail Strikes May Trigger Wider Protests, Public Disorder20 June, 06:00 GMTThe UK’s biggest rail strike in 30 years over pay, working conditions and job security kicked off on 21 June. Around 40,000 members of the RMT union at Network Rail and 13 train operators are due to walk out which threatens to paralyse the rail network system. The government is considering railway reform to tackle the slump in transportation revenues because of the COVID pandemic. Once talks stalled between Network Rail and unions, the latter held a vote on a nationwide walkout.Unions are always ready to make concessions, says Roger Seifert, professor of Industrial Relations at the University of Wolverhampton, who specializes in strikes, trade unionism and public sector employment. The problem is that Network Rail, which controls the entire network, signaling and safety, is a government-owned company and if the government doesn’t give more money, then there’s less scope for a settlement.

"[Network Rail is] arguing they need to get rid of 2,000 jobs to bring in new technology and make it more efficient," Seifert says. "The union is saying 'we are prepared for job losses as long as they're all voluntary and nobody's compulsorily made redundant'. But they also argue that any increase in wages has to be linked to a promise of job security in the future."

The eleventh hour talks aimed at preventing the strike collapsed on Monday with the unions accusing the Tory government of meddling in negotiations and not allowing Network Rail employers to communicate “freely”.Although Transport Secretary Grant Shapps refused to take part in the formal negotiations with the rail unions, the government is acting like a “puppet master” from behind, argues Hedley. At the same time, No 10 doubled down on castigating unions for being “outdated”, hindering “progress” and harming those they were entitled to help.However, the Tories have misjudged the situation if they thought that they were going to be popular attacking unions, according to Hedley. It’s not just rail workers but all workers and even members of the middle class who are facing severe economic difficulties.”I think their sympathy is with the strikers,” he insists. “People are saying, we can’t go on, taking pay cuts year after year – if the capitalist system can’t even provide enough money for people to subsist without using food banks, there has got to be a change.”© AFP 2022 / NIKLAS HALLE’N Protesters from the ASLEF and RMT unions stand at the locked gates of Brixton underground station during a tube strike in London on July 9, 2015 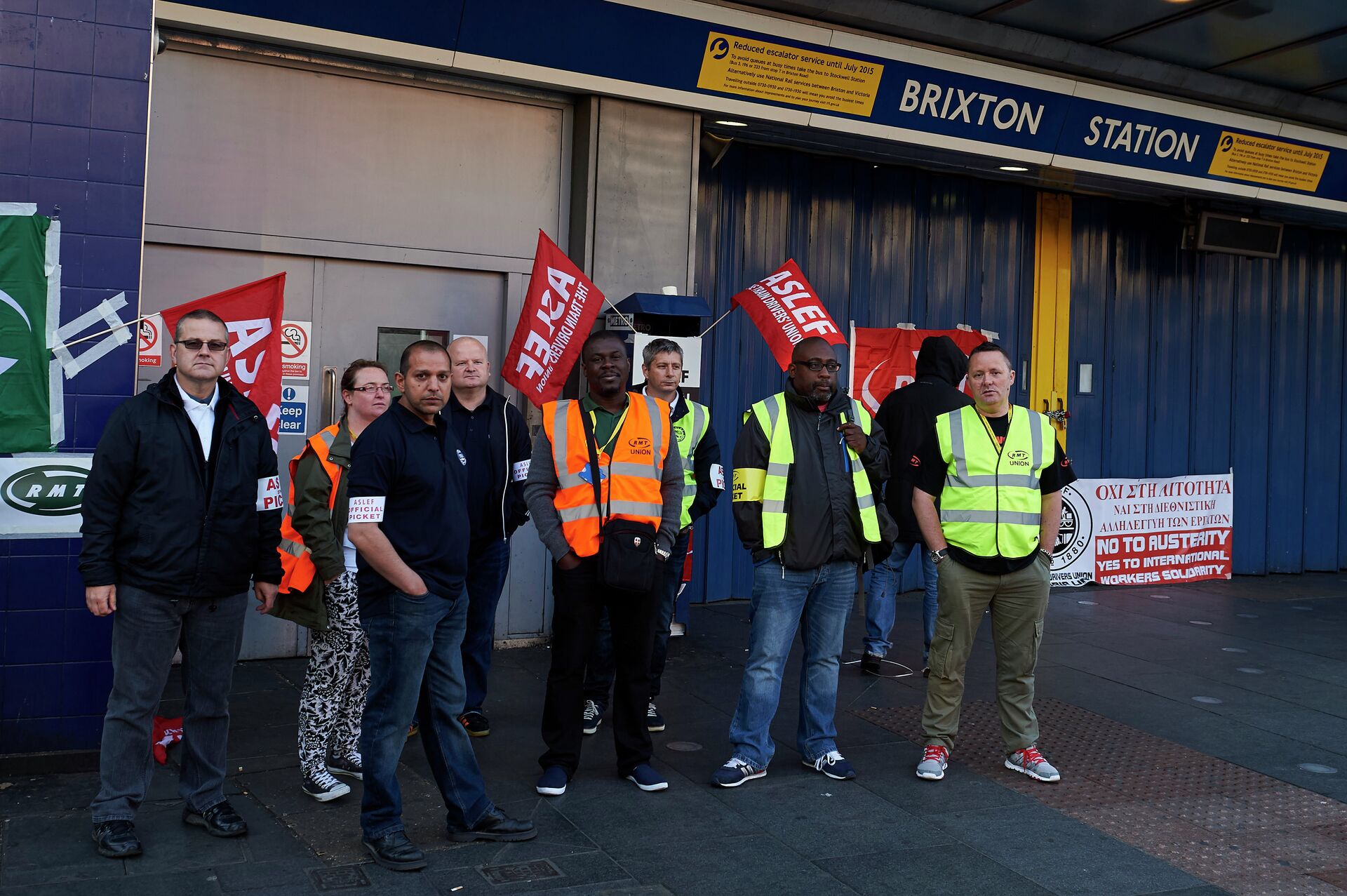 Protesters from the ASLEF and RMT unions stand at the locked gates of Brixton underground station during a tube strike in London on July 9, 2015

Is a ‘Class War’ Around the Corner in the UK?

Teachers, NHS workers and barristers were also said to be considering protesting, with education and healthcare unions indicating a readiness to launch industrial action in response to pay freezes and working conditions.”Everybody in Britain is in the same boat,” says Hedley. “We have a cost of living crisis. We have the massive proliferation of food banks, where I live. We have very long queues at the food banks and that’s people who are actually going to work – it’s not people who are unemployed. A lot of them are going to work and just can’t make ends meet. The price of fuel, the price of gas, the price of electricity, the price of staple foods – it’s all going up and people can’t afford it.”Hedley believes that nothing short of a “class war” is presently taking shape in Britain. According to him, there had been “a massive redistribution of wealth and power into the hands of a parasitic elite from working class and middle class people who have seen their standard of living plummet.”For his part, Professor Seifert argues that the situation is more complicated with the poor working class being at present divided between the left and the right.”When you talk about the poor working class, well they’re a mixed bag,” Seifert says. “They’re not one category. And so the poor working class who go to work and earn low wages are largely disaffected with the government. And at the moment, there’s no way back. But we have other sections of the poor working class; people on benefits, people who are pensioners and so on, who may support the Conservatives because of their nationalistic and populist anti-immigrant policies.”© AP Photo / Kirsty WigglesworthBritain’s Prime Minister Boris Johnson walks down Downing Street after a press conference in London, Wednesday, May 25, 2022 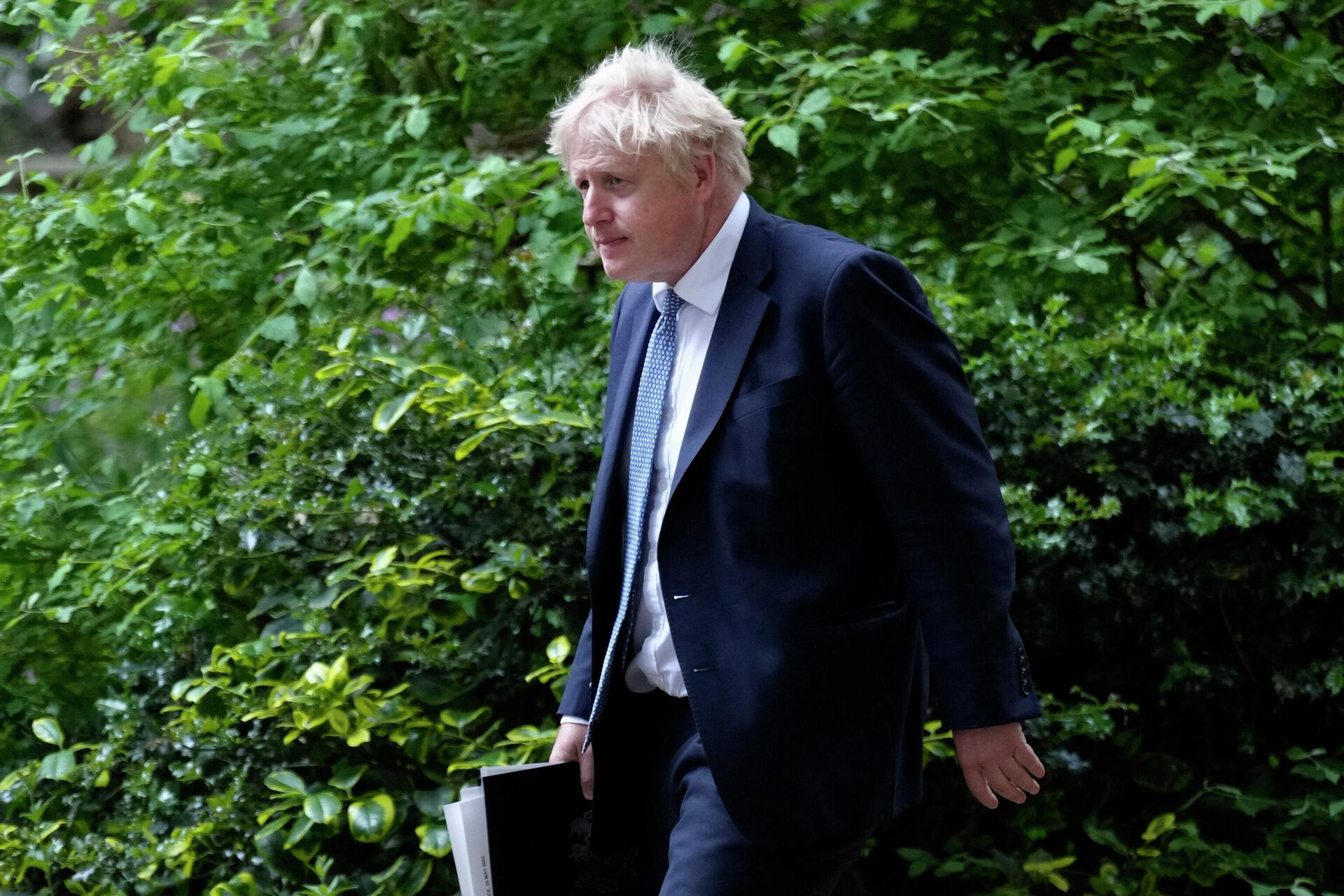 Britain’s Prime Minister Boris Johnson walks down Downing Street after a press conference in London, Wednesday, May 25, 2022Unions’ Hardball StrategyThe British unions appear to have taken a tough stance as No 10 has yet to demonstrate that it is ready for real “sensible compromises”.

"If the [union] members don't believe they've got a credible chance of winning, then they won't go on strike," says Seifert. "So the union has to talk – as all politicians – to their own people first and foremost. But second, they're also saying to the employers and the government, 'Look, it's up to you. If you don't make some changes, then there will be massive rail disruptions throughout the summer', and it'll just get worse and worse and worse."

The academic presumes that even though the government and the unions are issuing “threats” to each other, by the end of the week the picture may look “slightly different”.For his part, Hedley rules out an easy outcome in the row between the Tories and unionists. According to him, the industrial actions will last “as long as it takes, and we won’t give up until our members are satisfied that they’ve got what they want.” One of the reasons behind this is that the unions and workers have zero trust in the incumbent government, Hedley emphasises.”I don’t think there is any chance among the wage workers, most advanced workers and most trade unionists for this government ever regaining trust,” Hedley says. “It’s not just the economic mismanagement of the economy, but also the fact that the prime minister is an unrepentant liar. He’s been telling lies about his parties and we’re having to demonstrate. I just meant that they are just a completely untrustworthy bunch now. So the sooner we have a general election here, the better.”

Is Biden’s Refusal to Send Long-Range Rocket Systems to Kiev a Harbinger of US Policy Change?

Row Over Roe: How Could SCOTUS Abortion Ruling Affect US Political Landscape Ahead of Midterms?

Ex-UN Expert: Kissinger’s Solution to Ukraine Crisis is Safer for US & EU Than Soros’ Gamble