A bulldozer is being used to demolish the illegal structures of the residence of Javed Ahmed, a local leader who was allegedly involved in the recent violent protests against Bharatiya Janata Party (BJP) former spokeswoman Nupur Sharma’s incendiary remarks about Prophet Mohammed, in Allahabad on June 12, 2022 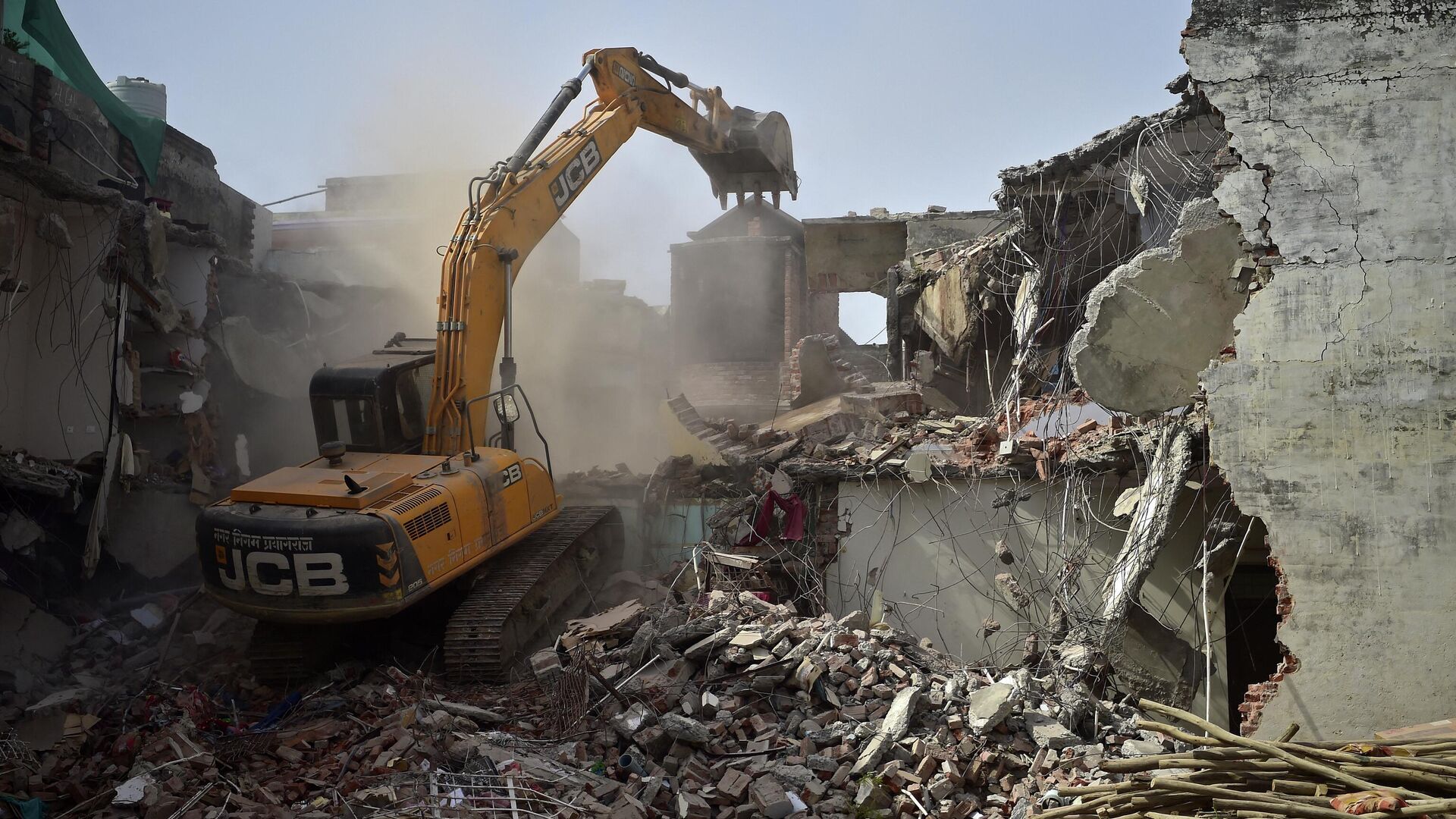 Rahul Trivedi After Uttar Pradesh witnessed violent protests over the anti-Islamic remarks of now-suspended BJP spokeswoman Nupur Sharma as well as the party’s Delhi media unit chief Naveen Kumar Jindal, State Chief Yogi Adityanath told media that the houses of those involved in violence would be razed using bulldozers.The Uttar Pradesh government on Wednesday told India’s Supreme Court that the recent demolitions in the state were carried out in accordance with the law, and no property was demolished to punish those involved in violence that was triggered by BJP politicians’ remarks.The Yogi Adityanath-led Uttar Pradesh government was responding to a plea filed by a Muslim organization, Jamiat Ulama-i-Hind challenging the demolitions in the state while alleging that a particular community was targeted.

“Demolitions had no relation to the riots. The ongoing demolition drive is against encroachment and illegal construction under the Uttar Pradesh Planning and Development Act, 1972," the state government contended.

It also stated that lawful action was taken by the local development authorities “as per the procedure established by law”.The government also sought the dismissal of the plea and demanded that fines should be levied on the petitioner.The Yogi government said that the petitioner (Jamiat) has “attempted to give a malafide color to lawful action” taken by the local development authorities as per procedure established by law by cherry-picking one-sided media reporting of a few incidents and “extrapolating sweeping allegations” from the same against the state. “The same, it is submitted, is completely false and misleading,” it added.

Last week, Jamiat Ulama-i-Hind filed a plea in the apex court against the demolitions carried out in Kanpur, Prayagraj and other districts of the state.The Muslim body said in its plea that several properties were demolished without giving an adequate opportunity of hearing to the affected persons/families and this was in complete disregard of the principles of natural justice as also the municipal laws pertaining to demolition of properties.It also alleged that the state government was targeting a particular community through the demolition drive.The Jamiat Ulama-i-Hind sought directions from the top court to the Uttar Pradesh government to stop further demolition of the properties.After the plea was filed, the Supreme Court of India issued a notice to the state government on 16 June, sternly saying that “demolitions have to be in accordance with law, they cannot be retaliatory”.The court also indicated its inclination to examine the legal question of whether the Uttar Pradesh state government had followed due process of law before demolishing the properties in places like Kanpur and Prayagraj districts.

Violence had erupted in several parts of the state on June 2 and June 10 over the BJP politicians’ derogatory remarks about Prophet Muhammad.Uttar Pradesh State Chief Adityanath spoke about demolishing the properties of those involved in the violence.His statement was reiterated by Additional Director General of Police Prashant Kumar and Police Commissioner of Kanpur Vijay Singh Meena.On June 11 and 12, demolitions were witnessed in Kanpur, Prayagraj and other districts of Uttar Pradesh.