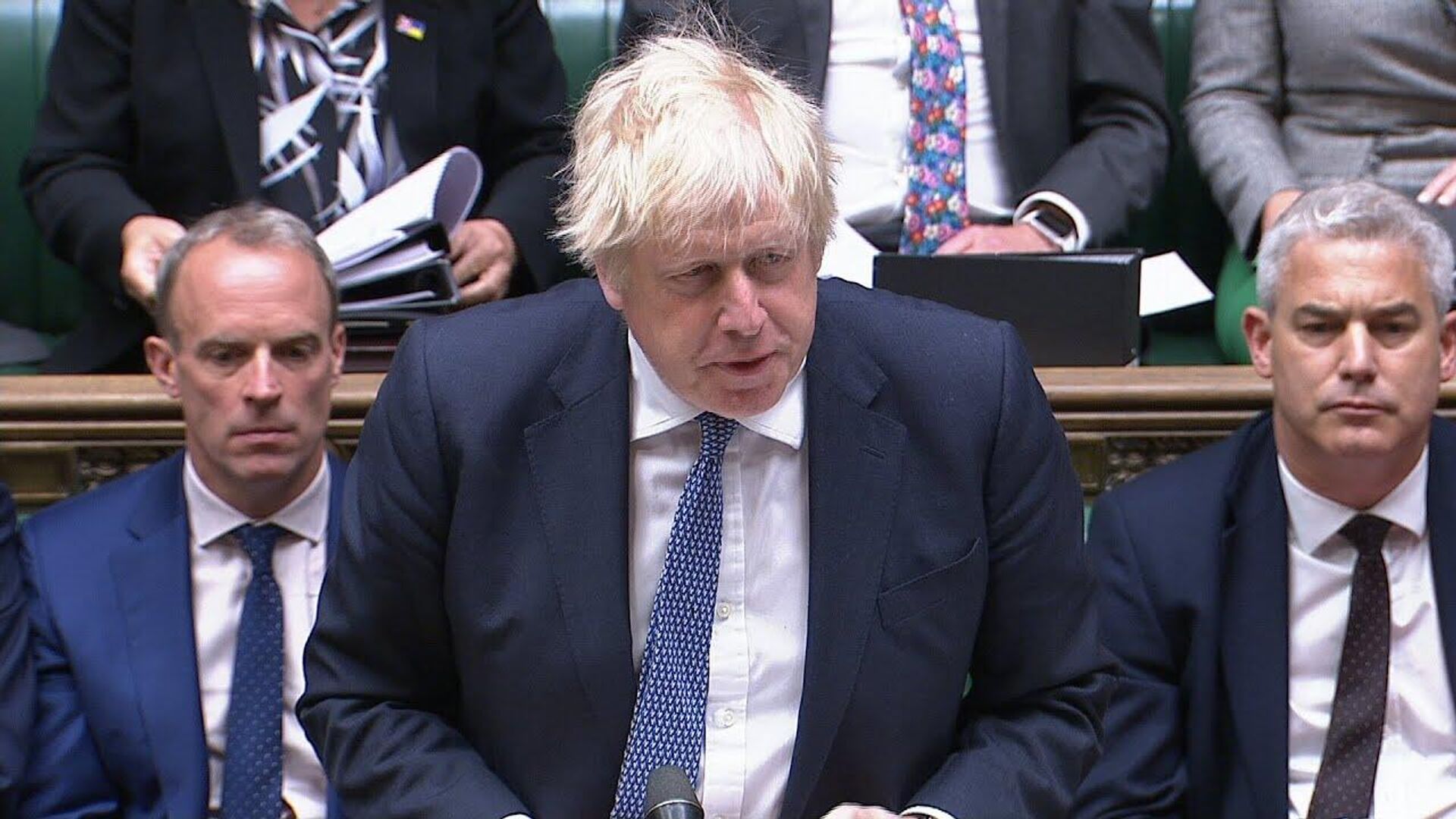 From the outset of the “partygate” row, there have been increasing calls from the opposition and rebel Tory MPs for Boris Johnson to resign. The UK’s PM is at present facing an inquiry by the Standards and Privileges Committee into whether he misled Parliament over lockdown revelry in Downing Street breaching COVID-19 restrictions in 2020-21. As “Partygate” trundles on leaving UK Prime Minister Boris Johnson painfully exposed, the chairman of the 1922 Committee, Sir Graham Brady, is considering tweaking the rules regarding leadership challenges, British daily tabloid The Sun has reported.The British politician who is also a Tory Member of Parliament (MP) for Altrincham and Sale West has reportedly “taken soundings” from Conservative party members on allowing leadership challenges every three to six months instead of having to wait a year as at present. It was even reported that Brady might be amenable to ditching the limit altogether.Under the Conservative Party’s rules, a vote is triggered when 15 percent of the party’s MPs send a letter of no confidence to the 1922 Committee chairman. At present, the party has 359 MPs, so 54 have to send in such a letter. All Conservative MPs may vote in the ensuing ballot, with the result dictated by a simple majority.Under present rules, were Johnson to win a vote of no confidence, he would be spared any other challenge for a year.But if the year’s grace were to be reduced to, say, three months, it would leave embattled Johnson facing a rolling leadership threat.

‘Wavering’ MPs Lobbied to Back BoJo as He Faces Growing Threat of No-Confidence Vote: Report1 June, 09:17 GMTSources close to Brady were cited as denying that such plans were being mulled. There has been no official comment on the report from the UK Conservative Party.

Right from the outset, the so-called “partygate” row has triggered Opposition demands for Johnson to step down. After both Scotland Yard and senior civil servant Sue Gray wrapped up their respective investigations into the alcohol-fuelled lockdown parties in Downing Street during COVID-19 restrictions in 2020-21, Johnson received a solitary Fixed Penalty Notice (FPN) fine.The Met issued the punishment to Johnson – as well as his wife, Carrie, and Chancellor of the Exchequer Rishi Sunak – for having attended a surprise party for the PM’s 56th birthday on 19 June 2020 that was found to have breached coronavirus lockdown restrictions. Johnson apologised for the incident, but maintained he believed it was a work event.

Report: Carrie Johnson Organised Second Law-Breaking Party in Downing Street29 May, 14:53 GMTHowever, the row is far from over, as Boris Johnson is now facing an inquiry by the Standards and Privileges Committee into whether he misled Parliament over the aforesaid gatherings in Downing Street. The offence could represent a breach of the ministerial code.Besides the traditional calls from the opposition Labour party for the PM to quit over the scandal, a Tory revolt against Johnson has been brewing.After Gray’s report was published, a clutch of MPs confirmed they had submitted formal letters of no confidence in the party leader. Around 24 MPs have publicly called for the Prime Minister to go.However, according to the Daily Mail, the rebellion against the PM is dangerously close to descending into chaos, as anti-Johnson factions are split on what moves they should take.Some rebel MPs are reportedly concerned that if the threshold of no-confidence letters were to be reached in the immediate future, triggering a full ballot, Johnson would have no difficulty winning. Accordingly, the newspaper reports, these MPs have been urging colleagues to wait until after two by-elections on 23 June before making a move on Johnson.Johnson’s opponents would need more than half the party’s MPs to support them if a confidence vote were to be called. But the PM’s allies have ridiculed claims that rebel MPs have the numbers they need, the publication said.Deputy Prime Minister Dominic Raab said on Wednesday he did not believe a vote would be triggered next week, as he “doubts” that even 40 letters have been submitted to Brady.This comes amid reports of infighting among the Tory rebels after former minister Tobias Ellwood suggested, in an article for the House parliamentary magazine, that the UK should rejoin the EU’s single market. The move, according to him, could help ease the cost of living crisis.His remarks were seized upon by Johnson’s allies, who suggested that attempts to force a confidence vote next week indicated an “anti-Brexit bias.”David Frost, the UK’s chief negotiator throughout the Brexit negotiations with the European Union, slammed Ellwood’s arguments as showing that “Brexit really is not safe in his hands or the hands of his allies’”.Another senior MP was cited as saying:

“After all the pain we went through on Brexit, he’s still hell-bent on trying to drag us back into the EU, and he’s willing to sacrifice the prime minister who delivered Brexit to get there.”

The Foreign Affairs committee chairman Tom Tugendhat, who was the first to admit at the start of the year that he would throw his hat into the ring if there were a Conservative party leadership contest, said on Twitter that Ellwood was “wrong”, and the “Single Market puts the EU in charge.”A similar stance was displayed by some MPs who had called to oust Johnson.Senior Tory MP Mark Harper, who has submitted a no confidence letter in the PM, said he categorically disagreed with Ellwood.Yet another Tory MP who is believed to have submitted a no-confidence letter reportedly said that Brexiteers outnumbered Remainers among those who have openly called for a confidence vote.Regarding the potential successor to Johnson, Sunak, previously the favourite, has also seen his reputation tainted by fall-out from “partygate”. Sunak also received a fine for appearing at the PM’s birthday party and has seen his poll ratings plummet over the cost-of-living crisis. He has also sustained damage over revelations that his wife Akshata Murty, whose parents founded and own IT behemoth Infosys, enjoys non-dom status to avoid paying tax in the UK. Former foreign secretary Jeremy Hunt, Tugendhat and Minister of State for Trade Policy Penny Mordaunt have been eyed as potential successors of Johnson. Some have suggested Foreign Secretary Liz Truss and Defence Secretary Ben Wallace might also be in the running.

BoJo Says It Would Be Irresponsible to Resign Amid Ukraine Crisis as He’s Grilled Over Partygate1 June, 16:33 GMTAs for Johnson, he stated earlier this week that quitting over the “miserable” scandal would be irresponsible, citing “huge pressures” on the economy, and his “massive agenda which I was elected to deliver”,