People stand in a queue to cast their votes during the seventh and final phase of Uttar Pradesh state legislature elections in Varanasi district, Uttar Pradesh, India (File) 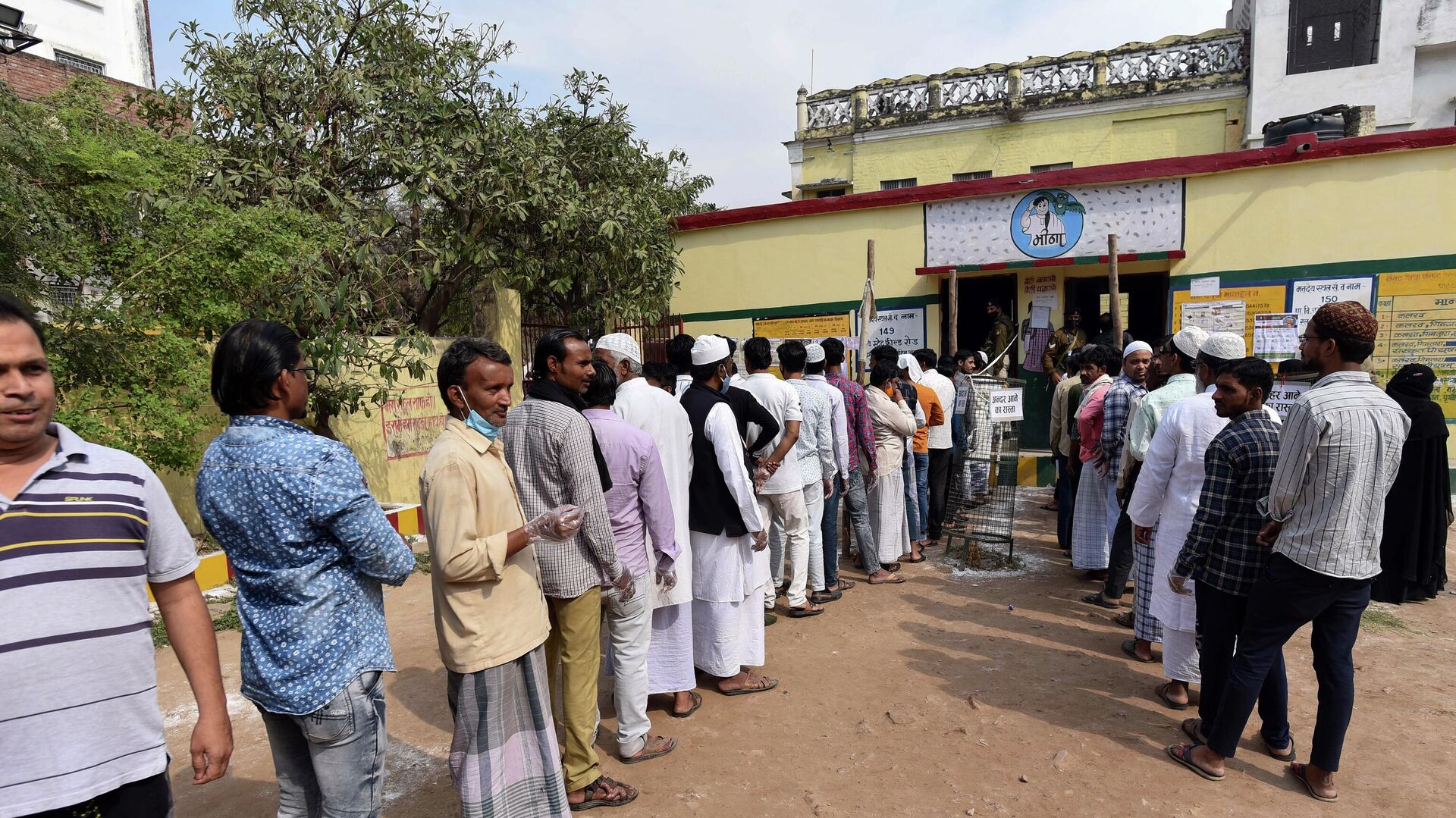 Deexa KhanduriSputnik correspondentAs the tenure of incumbent Indian President Ram Nath Kovind comes to an end on July 24, the polling for the country’s 15th President is scheduled to be held on July 18, while the counting will be conducted on July 21.India is all set to witness its 16th Presidential Election soon, with the ruling BJP-led National Democratic Alliance, and the Congress-led Opposition announcing their respective nominees — Draupadi Murmu and Yashwant Sinha, for the highest post in the country.The winner will be elected 15th President of the country since President V.V. Giri served in the position twice during the late 1960s.Sputnik has taken a look at the main rival candidates in the upcoming elections.Draupadi Murmu, India’s First Woman to Run for PresidentMurmu is a 64-year-tribal leader who hails from eastern state of Odisha. She was named the Presidential nominee of NDA, hours after former federal Minister Yashwant Sinha was declared the joint nominee of major Opposition parties, including the Congress, Trinamool Congress (TMC) and the Nationalist Congress Party (NCP).Born on June 20, 1958 in Baidaposi village in Odisha’s Mayurbhanj district, Murmu belongs to the Santhal ethnic group.Murmu served as a Minister in Odisha from 2000-2004. In 2007, she was conferred with the Nilkantha award for best lawmaker by the Odisha Legislative Assembly.Later in 2015, she was appointed as the first female Governor of the state of Jharkhand. Prime Minister Narendra Modi has said Murmu has “devoted her life to serving society” and that he is “confident she will be a great President”.Murmu has one daughter, who is married. She has outlived both her husband Shyam Charan Murmu and her two sons. Her husband passed away following a cardiac arrest. In 2009, one of her sons died under mysterious circumstances, and in 2012, her second son died in a road accident, news agency PTI reported.

Yashwant Sinha is an 84-year-old politician who quit the BJP in 2018 after being sidelined. Today, he is known as a staunch critic of Prime Minister Narendra Modi.Sinha was born in Bihar’s capital, Patna, on November 6, 1937. He joined the administrative service in 1960, resigned in 1984, and started his political career as a member of the Janata (People’s) Party.He soon served as the federal Finance Minister under the Prime Minister Chandrashekhar-led minority government from November 1990 to June 1991. Sinha joined BJP in 1993, and in 1996, the party made him its national spokesperson.Later, Sinha also served as External Affairs Minister in the Prime Minister Atal Bihari Vajpayee-led NDA government for almost two years, till 2004.He has been a vocal critic of the BJP government’s policies, including the Citizenship Amendment Act (CAA), for which Sinha launched a 3,000-km Gandhi Peace March, demanding its withdrawal.In 2021, he joined Trinamool Congress and served as party vice-president till Tuesday.

According to Sanjay Kumar, a professor, political analyst and psephologist, NDA candidate Murmu is all set to win the 16th Presidential election, as BJP and its allies already have 49 percent of the vote. It means the support of one or two leading regional parties would help Murmu easily triumph in the election.”It’s very clear that numbers are in favor of the ruling party. I don’t see any element of surprise in it. The only thing that will surprise is to see victory margin — big or narrow margin,” Kumar says.Many regional parties like the ruling parties of Odisha, Jharkhand and Telangana have not announced support for any candidate.However, Odisha State Chief Naveen Patnaik has tweeted to congratulate Murmu for her candidacy, saying the announcement that she was running is a “proud moment for the people” of the state.

"All these parties have a large number of tribal populations in their state. And, I believe they will extend support to Murmu," Kumar predicts.

Speaking on the BJP’s strategy of naming Murmu as Presidential candidate, Kumar said, “Murmu will be the first tribal woman to occupy the highest post in the country and second woman President.”He said the idea is to reach out to rural and tribal people and tell them “that BJP stands for them, especially in tribal states where BJP is not ruling like Jharkhand, Odisha, and northeastern parts of the country”.”Meanwhile, voting trends of the past 10 years of other political elections show that the number of women voters is on a rise,” Kumar explains. Murmu’s candidacy and victory will help the BJP in showcasing that the country also thinks about female empowerment and upliftment, Kumar underlined. However, commenting on the opposition’s candidate Sinha, he said, “Yashwant Sinha has a wide range of experience, from political to bureaucracy.””But, somewhere, even the opposition knew that they couldn’t win the election but they want to send out a large message that we have a better candidate than BJP,” Kumar says.

How Numbers Are Placed in a Presidential Poll

In India, the President is elected by an electoral college consisting of “elected members” of both Houses of Parliament and lawmakers of the states and Union Territories of Delhi and Puducherry.A total of 4,809 electors, comprising 776 members of Parliament (MPs) and 4,033 members of the Legislative Assembly (MLAs) will vote to elect Ram Nath Kovind’s successor.The total value of votes of MPs for this election is pegged at 543,200 and that of MLAs at 543,231, taking the total electoral college votes little more than one million (1,086,431).Candidates need simply majority mark or 51 percent of the vote to win the Presidential election.Currently, the BJP-led NDA has about 535,000 votes, roughly about 49 percent of the total votes.The NDA requires just two percent more votes to ensure its candidate is elected the President of India.